Over the past two weeks 6,000 delegates met in bomb-shocked Ankara, Turkey to seek agreement on the way forward for the global agreement on land, the United Nations Convention to Combat Desertification. In the 21 years since it was adopted, this was the twelfth meeting of the 195 ‘parties’ to the Convention. Desertification, or the loss of productivity of land, is a global problem affecting countries from Iceland to Australia.

The refugee crisis in Europe in intimately linked to the politics of Turkey and the war in Syria. The reality that the Syrian crisis was partly precipitated by a prolonged drought, rising temperatures and loss of livelihoods of many thousands of farmers caused delegates to pause and reflect on the vital significance of sustainable land use in the overall context of the stability of society.

In the run-up to the UNFCCC COP 21 in Paris in December, the Ankara meeting was highly significant. Soil is increasingly being seen as a ‘carbon sink’ whose potential has not been adequately recognised or made use of. On the other hand, the ways in which we use the land are associated with a range of economic, social and ecological problems. According to the IPCC, agriculture contributes to over 20% of global anthropogenic greenhouse gas emissions (21%–25% of total CO2 emissions, 55%–60% of total CH4 emissions and 65%–80% of total N2O emissions). Nevertheless, the soils of the planet have the potential to sequester vast quantities of carbon, if used in the right ways. The climate agenda must therefore address land use.

The UNCCD is an exception amongst the UN’s environmental agreements, in that it recognises the central role of people in sustainable land use. The Convention recognizes the physical, biological and socio-economic aspects of desertification, the importance of redirecting technology transfer to be demand- driven, and the importance of involving local communities in combating Drought, Land Degradation and Desertification (DLDD). This emphasis makes the Convention an ideal vehicle for promoting participatory adaptation to climate change.

There is no doubt that moving towards this goal will be vital to the very survival of humanity. Through misuse and over-exploitation, people have always caused the destruction of agricultural land. However, current losses of arable land are estimated at 30 to 35 times the historical rate.  Global estimates by the UN indicate that 52 per cent of the land used for agriculture is moderately or severely affected by soil degradation. Each year 12 million hectares are lost, affecting the livelihoods of billions of people.

The Twelfth Conference of Parties

When the twelfth session of the Conference of the Parties to the UN Convention to Combat Desertification (UNCCD COP 12) convened in Ankara, Turkey this October, their task was to find ways in which the governments of the world could agree to take more effective action to reverse the trend. 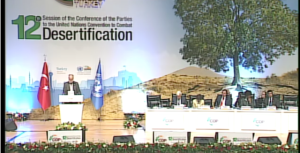 Approximately 6,000 participants gathered for the two-week meeting, which adopted 35 decisions, including how to pursue the target to achieve land degradation neutrality (LDN) and how to align actions undertaken in the context of the UNCCD to the Sustainable Development Goals (SDGs).

Long limited by the Convention’s definition of desertification as a process occurring only in the world’s drylands, COP12 took on board a broader understanding of land degradation and in its decision ICCD/COP(12)/L.2, noted ‘the significant proportion of land degradation occurs beyond arid, semi-arid and dry and sub-humid areas’ and recognised ‘that parties may use the UNCCD to guide their policies to DLDD and voluntary targets when striving to achieve LDN at national and subnational levels’. This seemingly innocuous decision was the result of many hours of wrangling to overcome the resistance of some parties that did not want to be obliged to implement the UNCCD in more humid areas.

Much of the work of the COP takes place in committees and working groups. The Committee on Science and Technology (CST) and the Committee for the Review of the Implementation of the Convention (CRIC) tabled a number of decisions for adoption by the COP. Unlike the Committees, which are open to civil society observers, the contact groups negotiate out of sight of observers, yet play a key role in determining the outcomes of the COP. The five contact groups that negotiated the COP’s decisions focused on the Programme and Budget; Matters Other than Programme and Budget; the CST; the CRIC and lastly joint CST/CRIC matters.

The CST developed six decisions for COP consideration, regarding the outcomes of the UNCCD 3rd Scientific Conference, improving the efficiency of the CST, improving knowledge dissemination, and the work programme of the Science-Policy Interface (SPI), among other issues. The CRIC developed eight decisions for COP consideration, regarding, inter alia: collaboration with the Global Environment Facility (GEF); establishment of national- level voluntary LDN targets within National Action Programmes (NAPs) and national reports, including funding to support national target-setting towards achieving LDN; actions to achieve the 10-year strategic plan and framework to enhance the implementation of the Convention (2008-2018) (the Strategy); procedures for communication of information to be submitted to the COP, including on progress indicators for trends in land cover, land productivity, and carbon stocks; and a results framework against which the CST, CRIC, Global Mechanism (GM) and Secretariat will organize their work for the period 2016-2019.

By the conclusion of the COP delegates had agreed that parties would play an important role in the follow-up on the United Nations 2030 Agenda for Sustainable Development by striving to achieve a single, unified objective and collectively delivering on SDG target 15.3, which seeks a ‘land degradation neutral world’.

The challenge with the achievement of this goal lies not only in reversing the enormous losses of productive land, but also in assessing how ‘neutrality’ should be measured, and what political, economic and social trade-offs will be needed to achieve it.

The decision taken to recognise and support further elaboration of the Science Policy Interface (which was established at COP 11 as the mechanism to bring scientific advice to the parties) is an important one, not only in the challenging context of the assessing land degradation and restoration, but doing so in ways that also address the commitments of parties in the contexts of the UNFCCC and the CBD.