The South of Madagascar is a semi-arid zone submitted to a dry and hot wind. The practice of agriculture there is difficult and the population is regularly subject to the risks of food insecurity. The windbreak hedges, at the level of the coastal zones, constitute a means of limiting the strengths of the wind which destroys crops and dig out arable soils. The FASARA project associates itself with farmers to find out the best combinations of species to be used, both to fight against the wind but and also to benefit from the various advantages offered by the properties of these species.Revised Short Version: Fighting the Tiokatimo Winds: Farmers Experiment – Windbreak Hedges (in pdf-format – 090914)

The Androy region covers a zone of about 20 000 km² to the extreme South of Madagascar. It is a zone characterized by a semi-arid climate which is partly justifiable by the foehn phenomenon provoked by the “anosienne” Chain1. A violent wind coming from the South,called Tiokatimo also provokes drying up, erosion and sand dunes. 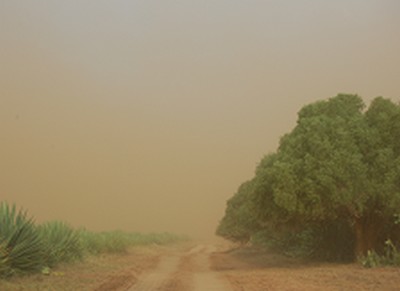 Wind erosion
The scarcity of water is the particularity of this region: underground water most often brackish, low rainfall level and uncertain (between 300 and 600 mm per year), no river or permanent water ways.
The main economic activities of that enclaved region are agriculture (corn, cassava, sorghum, sweet potato) and husbandry. One can divide this region into three zones: a sedimentary zone in the South, an intermediate zone and a crystalline zone in the North of the region.

2. The sedimentary zone: a zone of high risk concerning desertification
Presentation of the zone
The sedimentary zone can be broken down into three main types of soil. white sands Soils, nearest to the beach, are especially poor and little cultivated. Climbing back up north, the reddish brown sand soils are rich, slightly eroded but at times charged with sand dunes. In some places more localized, one also finds soils with black clays sands that are rich and cultivated.
Vegetation, characterized by its endemicity and its fragility, is of the spiny bush type dominated by the Didieracéeses, the Euphorbia and the Apocynacéeses. The bocage style is commonly implemented by the inhabitants: hedges of cactus are planted around the plots essentially to delimit and to protect them against the straying of animals.

The indicators of desertification
The zone close to the sea that is the most exposed to desertification. The plots closed to the onshore dunes are subject to sand intake. Some quick dunes develop in localized manner. White sands soils get eroded leading to stony soils. Reddish brown sands soils are sand dunes loaded.Causes of this situation
The climatic regime is the first cause of this situation.
The entropic exploitation modes of the soil also contributed to aggravate the phenomenon. The extension of agriculture on a limited space, decreases the resting time granted to the land via fallow, to regenerate. These fallows, where grows couch grass, cover crop, decrease whereas at the same time, the couch grass is more and more used to burn the prickly pear, one of the rare sources of fodder crops in the area. Also several factors contribute in limiting the coverage of the soils. Moreover, ploughing exposes the naked soil to wind and favours erosion.
The zone most close to the sea experiences a sort of vicious circle of desertification. With the apparition of plow in the years 60, it was the one that has been cleared and cultivated first. Currently, because of the poor fertility of its soil and the decline of transhumance in the rest of the region, it is used more specifically for grazing. It is therefore also particularly concerning, in dry season, by the use of cactus hedges to feed the livestock, which increases the exposure of soil to wind and desertification.

Specific objective: To attenuate the erosive and drying effect of dominant winds of south East on soils and crops (objective of the component)

Activities: setting up of windbreak hedges

The windbreak hedges are put in place around the crops plots. In the beginning, implanted alongside the contiguous plots, they are henceforth put in place around the individual plots because that operation requiring the coordination of different land owners was difficult.
The everlastingness of the hedge is supposed to be linked to the interest of its different uses for the farmer. That is why it was chosen to install the hedges mixing different species with different functions, each of it having, at a minimum, to assure a good protection against wind.

The hedges present different interests according to the used species. They can provide biomass for a direct seedling agriculture under plant coverage, but also of eatable products (listed) and of wood, etc.

The tests led to put aside some species. Among them: Tamarindus indica, Morenga oleifera, Jatropha mahafaliensis, Casuarinas, Albizzia, The Morenga is not bearing leaves during the period when winds are strong. The growth of the Tamarindus is slow. The Albizzia is difficult to cultivate in nursery…

Two rows of trees are planted in staggered rows at one meter distance from each other. In the phase of growth, the trees need protection. This is testified by the high death rate of trees (50% every year). It appeared therefore necessary, in the first stage, to double those hedges with hedges of cactus acting like a protective strip during growth. Because of their spiny character, the cactuses associated to the hedges also permit the protection of the crops against the straying of animals.

The mils or cajanus are other protective strips that present interests. They have the particularity to have an agricultural use. The mil is annual; it must therefore be implanted according to the periods of violent wind to play its protective role. Mil and cajanus are eatable and possess the property to improve soil fertility. Their limits reside in the availability in seed for farmers.

Setting up:
The hedge must make obstacle to dominant winds that blow during the months of August and September from the Southeast. 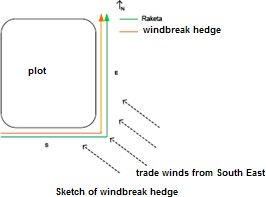 Organization of the supply and monitoring

The implementation of this activity is achieved by a team of 8 animators installed in different points of the intervention zone. The FASARA project gets its stock from two associations of nursery women formed initially by South Objective (Ampela mitraoke, Vehivavy mianala).
The plants are provided to individual farmers who wished to take part in the experience. At first carried out in all the councils of the project intervention zone, that activity was reduced to 6 councils, at the rate of 2 to 4 fokontany per council, in order to concentrate the experience in a more reduced zone and to get more visible results.

The Support Program to the Agricultural Networks and of Improvement of Food Security in the Androy Region (FASARA) is put into implementation in the Androy region by the Group of Research and Technological exchanges (GRET) since December 2005 and until the end of the month of May 2009. This project, financed by the European Union, comes in the continuation and the extension of the activities of agricultural component of the project «South Objective “. One of the activities of the FASARA project consists in promoting the development of windbreak hedges.

It is important to maintain the plantation of hedges when there are rains but also to minimize as much as possible the efforts required so that they can fully dedicate themselves to their crops: to organize the digging of holes in periods of low activity for example.