The Underground Gardens of Bushire – Iran

Situated in the south of Iran, the province of Bushire (Bushehr) has an arid and hot climate in which the temperature can reach over 50 degrees. In these very desert regions of Iran, local communities have developed ingenious ways of coping with nearly desert conditions.

A unique example of this is the underground gardens of Iran, where traditional agricultural knowhow is combined with clever water harvesting techniques to produce stunning quantities of grapes. 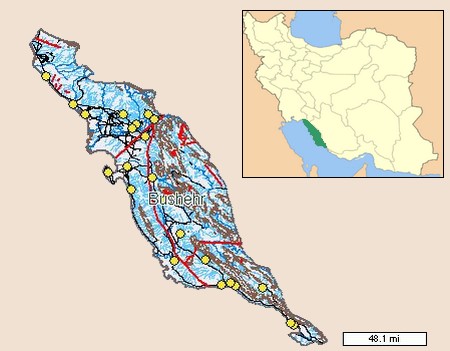 A stone wall of some 50 metres in diameter encloses every field. The ground outside is fashioned with features that capture and lead the very rare flash floods to an underground cistern half filled with topsoil. Rich harvests of tree crops are achieved in this manner.

This place is well known for droughts. No rivers run here, and rain-fed crops are nearly impossible normally, because the rains come in very rare flash floods. Therefore they usually had to dig wells reaching 20-30 metres to get to water that they pulled using animal power in order to plant anything.

In the case of grape vines, underground cultivation chambers were dug reaching some 6 metres in depth. In these chambers top soil and suitable branches were placed to grow. To keep the vine fields from damage by animals, they constructed protective walls around the fields covered by thorn bushes. These chambers were some two or three metres across and dug to a depth of some 5 or 6 metres—until reaching a “greasy” soil which is called “shol” in our local language.

In the past grape vines were widespread here. In our village there used to be some 150 underground gardens. I used to have 7 of them myself! My forefather Gholam Reza planted them five generations ago. His son was my great grandfather Ali who was succeeded by my grandfather Gholam Ali. My father, also called Ali, inherited the gardens and passed them on to me, Abdullah.

Expert well diggers were employed for constructing the underground chambers. They used simple digging bars. As soon as they reached the shol, they filled the chamber half way with top soil. In January, at the beginning of winter, farmers would select suitable branches of vine, and plant them in good soil to sprout. In March, they would transfer the sprouting branches of vine in the underground gardens. In the dry months of the first summer, they may irrigate the young vines five or six times. In the following years, the vines need no more irrigation.

Vine branches creeping out of the underground chambers, are led atop stone stand called khan, about a metre high, filled with local stones. To harvest the bunches of grapes, workers pass under the branches.

Mock-up of the system (photo: CENESTA)

Unfortunately in the process of modernisation little attention is paid to preserving this ancient technology, which goes back some 4000 years to the Elamite period (an ancient civilization located in what is now southwest Iran, situated just to the east of Mesopotamia, Elam was part of the early urbanization during the Chalcolithic). Government agencies and urban expansion have invaded the area, each time swallowing much land and destroying many underground gardens. No more than a couple of villages are left in which this valuable technology can still be found. If the destructive trend continues, there will soon be no more of them left.

Fortunately, collaboration between CENESTA experts and the government has resulted in a recent decision to declare the remaining underground gardens “cultural heritage”. This will ensure the conservation of this unique technology for combating desertification.

Despite of the harsh climate, there is enough agro-biological diversity here. Seven distinct varieties of grapes were found in these underground gardens, all adapted to this climate. Up to two tons of grapes are harvested from a single underground garden per year.  Sustainable livelihood, food security as well as organic food production can be maintained by this technology.

Grapes and other cash fruit trees are planted in these underground gardens in order to provide income for the household. In this area you can see vines that are four or five hundred years old. Sometimes, even our great grand fathers had no idea when these vines had been planted. If one takes good care of these vines, they will survive indefinitely, as water and humidity of the soil are assured virtually in every underground garden all year round.