In the past twenty years or so large areas of Chile have been afforested with large plantations of fast growing timber crops, such as eucalyptus and pine. While some of these plantations have been established on deforested land, others were planted on lands traditionally used by indigenous peoples, in particular the Mapuche. Chile now has some 2 million hectares of land planted with fast growing timber species, which make huge demands on local water resources. The scale and density of these operations has played havoc with the local ecology. Rivers and streams which the Mapuche used to rely on for domestic consumption, for fishing and for their agriculture have dried up and have become polluted by agrochemicals used in different phases of developing the plantations and aerial spraying.

Many places where the Mapuche used to collect mushrooms and herbal and medicinal plants have been planted over. New animal species, introduced by the timber companies to control rabbit and hare populations, have disrupted the food chain. These problems have led to many Mapuche abandoning their traditional lands and way of life, often going to live in larger cities, where they end in poverty. In one community, Los Sauces, the population declined by 1 % between 1 2 and 2002. In some places whole settlements have been abandoned because of a lack of water. In other places the Mapuche people have had to abandon traditional mixed farming practices and start growing the same species to sell to wood mills of the timber companies.

Many communities now rely on deliveries of water in order to survive. The dense plantations also pose a fire hazard to the homes and villages of the Mapuche, as they often come right to the edge of their settlements. Finally, the size and scale of the plantations give rise to a sense of cultural dislocation among the native people, who no longer feel at home in the environment – especially when the trees are cut for timber, leaving vast barren swathes of hillside. 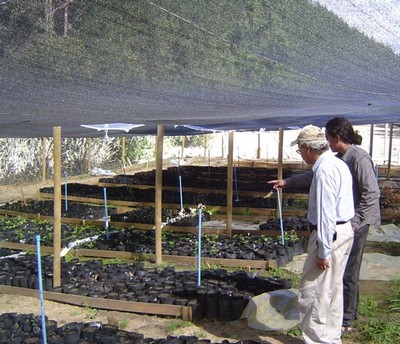 People from the surrounding area are invited to participate in the development of the tree nursery; to visit places where combinations of selected native species are helping to protect water sources. The destructive effects of monoculture and the ways to restore biodiversity are also explained in programmes broadcast on local radio stations.

In response to the challenges, a local community organisation, Hguallen Pelu Mapu, has established a programme entitled “Water and wisdom, dialogues for life.” They began by studying ways of addressing the exhaustion of water sources. They gathered one of the affected communities and established a dialogue with an organisation of foresters. This dialogue led to an experimental project to reforest specific places with native species to protect water sources, with the idea of using the knowledge acquired to replicate the same process in other rural areas affected by lack of water, deforestation and land degradation.

This programme was established in the rural municipality of Keuke, whose river had dried up. The programme had two key aims. The first was to sensitise local people about what was happening and of the possibility of changing the situation. The second, more practical, aspect was to establish a tree nursery for local indigenous varieties and then to start replanting these varieties on lands still owned by the communities close to the river’s sources.

The initiative is primarily an educational programme. People from the surrounding area are invited to participate in the development of the tree nursery; to visit places where combinations of selected native species are helping to protect water sources. Workshops are organised for sharing experiences and discussing ways of addressing the problems caused by tree plantations. These issues are also explained in programmes broadcasted on local radio stations. A nursery has been established with a capacity for producing -10,000 local saplings and it is hoped that the planting programme will help protect the Keuke basin and bring sufficient clean water back to the villagers. 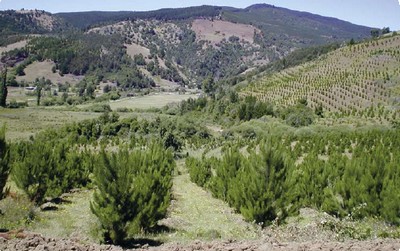