One Million Cisterns for Water Harvesting in North East Brazil

A program of civil society, in partnership with the government and private sectors which provides the construction of 1.000.000 cisterns in Brazil´s semi-arid region

In the semi-arid region of Brazil (895.937 square kilometers) rains are erratic, often coming in downpours followed by long dry periods even in the rainy season.

For 12 million people living in the rural areas of this region (as of the year 2000) access to drinking water is problematic during much of the year, particularly in years with little rain, when there is no refilling of dams and other water reserves. During these periods, hundreds of thousands of families depend on a supply of water imported by truck provided by government agencies. This water is purchased from the private sector. The people either drink this or are forced to make use of stagnant water with poor quality that they can still find in the depths of near empty dams.

Often, to obtain water, the people need to go on long daily walks to a far away source; this is commonly done by the women and children of the community. The water they procure is usually untreated, dirty and contaminated. It is not surprising then that the cause of death of one out of every four children in this region is due to diarrhea caused by the consumption of contaminated water.

The “Articulação do Semi-Árido Brasileiro” (ASA), a network of civil society institutions that work to promote co-existence within the semi-arid, has implemented, since the year 2001, a program that aims to build one million of cisterns to provide rural families with access to healthy drinking water.

Brazil is divided into five regions; South, Southeast, Central-West, North and Northeast. The latter holds 18.27% of Brazilian territory, having an area of 1,561,178 km2.

The semi-arid occupies an area of 841.261km2 in the Northeast and other 54,670 km2 in the Southeastern region, severely degraded in large part, due to large-scale deforestation, farming, and goat-herding beyond the capacity of the land.

In this region, the rainfall varies between 1,200 mm year – in mountains or regions with specific micro-climate – and 600 mm year, with irregularity within the annual period of rain as well as inter-annual. Hence, droughts are very common, including the so-called “green drought”, which occurs when the first rains, which allow the budding of plants, are followed by periods with insufficient quantity or absence of rainfall, which causes the loss of harvest. The rains often return, however, already too late for planting. 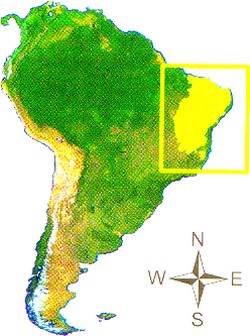 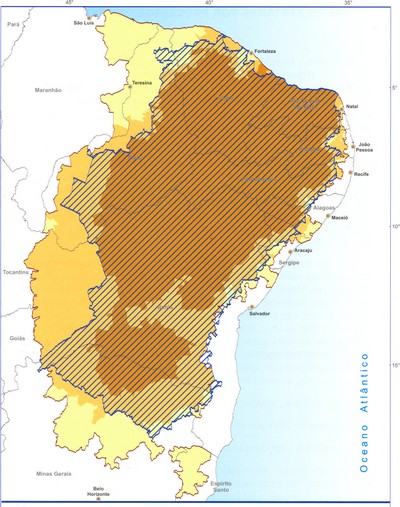 The use of cisterns to accumulate water from rain is a solution known since ancient times. The construction of tanks which will collect rain water from rooftops and store it for use during periods of drought, creates a simple and relatively inexpensive solution that can finally put an end to lack of water for human consumption throughout the Brazilian Semi-Arid.

In November 1999, during a parallel meeting to the 3rd Conference of the Parties of the Convention to Combat Desertification (held in Recife), a group of civil society organizations initiated a process that led to the creation of the Articulation in the Semi-Arid – ASA, and the development of a proposal to guarantee access to water for human consumption in rural households, via storage of rain water in cisterns.

The previous experience of some organizations in the construction of cisterns to capture water from rain, by family and community initiative, has created a reference that inspired the ASA in the design of the Training and Social Mobilization Program for Living within the Semi-Arid – One Million Cisterns – known by the acronym P1MC, ASA.

Since 2004 the federal government has also supported government initiatives, carrying out agreements with several states and municipalities in the region.

Several techniques for the construction of cisterns are used in the Northeast. The model chosen by the ASA for preferential divulgation, called the cement plate cistern, was invented in 1960 by a mason of the city of Simon Dias, in the state of Sergipe, by the name of Manoel Apolonio de Carvalho.

There are variations where, for example, the slabs of concrete are smaller and thicker, and made with a leaner mixture of cement. These plates are manufactured on site with simple frames fashioned of wood. The walls of the cistern are raised with these thin slabs, from the already cemented foundation (ground). In order to avoid collapse of the walls during construction, stick supports are used until the mortar is dry. After which, a galvanized steel wire mesh is placed around the walls exterior and it is then reinforced with plaster.

Next, the inner wall and the floors are plastered and covered with a durable cement plaster. The roof of the cistern, which is slightly domed, is made of concrete reinforced in length by concrete supports (beams). The earth surrounding the cistern is carefully packed in order to support it.

The sizes of the cisterns vary with the number of people in each home and the size of their roof. The average cistern holds about 16 thousand liters, which ensures clean water for 5 people to drink and cook from for up to 8 months. 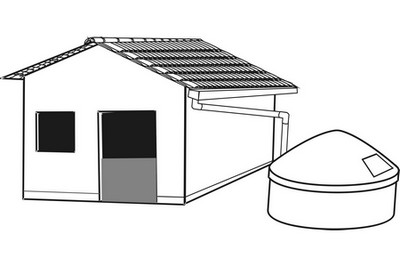 The program “A Million Cisterns” is made possible primarily through financial resources provided by the Cisterns Program, which comes from the Ministry of Social Developments and the Fight against Hunger. It also receives, albeit in a secondary level, the support of FEBRABAM (Brazilian Federation of Banks) through financial contribution and support for administration and control of the Program.

The participation of the organized society is given through the creation of a municipal committee or a city council already existing (in Brazil, various aspects of public policy are accompanied by councils with participation of civil society and local or state government) to monitor the construction of cisterns.

Usually, organizations like trade unions, churches, social movements, Service Clubs, and other entities of class participate on these commissions or municipal councils and may receive support from municipalities or other public agencies.

The municipal committee or council selects the families to be benefited, with consideration to the amount of cisterns to be built and the following criteria for prioritization, in the order below:

The chosen families are to be provided with a training that lasts at least 16 hours (two days of training). The training, at the expense of the institution chosen to build the cisterns, seeks to create awareness of the conditions within the semi-arid climate and their consequences as well as focusing on instruction for the use of their new cistern (care and treatment of water storage, maintenance of the cistern, health and safety, etc.).

The training in techniques for building cisterns aims to allow residents of the community to be the builders, generating income and passing on useful knowledge to the community.

The training involves the organization of teams of up to ten people, and occurs parallel to the demonstrative construction of one or more cisterns. The construction is coordinated by an already experienced instructor/bricklayer, who explains and demonstrates the techniques and procedures to the others.

The objective of the course is to establish a standard of performance for professionals responsible for the construction to ensure the quality of the work, avoiding failures of construction that could harm or even undermine the proper functioning of the cistern.

The program “One Million Cisterns” is an initiative of the Articulation in the Brazilian Semi-Arid – ASA, which brings together some 800 organizations (community-based organizations, trade unions, rural workers, authorities linked to the Catholic and evangelical churches, NGOs and labor cooperatives).

The funding is primarily from the federal government, through the Ministry of Social Development and the Fight against Hunger, through its Cistern Program, which also funds the construction of cisterns from state and local governments.

The management of “One Million Cisterns” is done through micro-regional management units, bringing together several municipalities (lowest Brazilian administrative unit; 5,560 municipalities in 2002). Institutions affiliated to the ASA are chosen to make this management through a public process of selection. In order to ensure decentralization in the implementation, it is possible that the same institution is managing the program in more than one micro-region.

The cisterns (cisterns) are built by masons from the proper localities, with the help of the families, which carry out the general services of excavation, acquisition and supply of sand and water and manual help in construction. Under the project, they receive training on issues relating to coexistence within the Semi-Arid and appropriate use of the cistern.

According to the latest available survey (11/2007) 221,514 cisterns have been built by this program. This is, of course, the primary success of the program “One Million Cisterns’.

In addition to the results in terms of improving the quality of life and reduction of diseases caused by ingestion of contaminated water, there is a contribution to reduce the dependence of these families on landowners and the local politicians, who use the access to water as means of policy promotion (patronage).

As well, there has been the consolidation of ASA as a political mediator of the national government for the discussion of issues on the Semi-Arid; the strengthening of its power as an articulator in the civil society; and the technical, financial and political strengthening of the organizations that coordinate the implementation of cisterns on a micro-regional level.

The cisterns are technically simple solutions, they are durable (there are functional cisterns existing over 40 years), and they can be built on all types of soil. Around five thousand regional bricklayers know how to build the cisterns already, while others are being trained as the program progresses.

Moreover, the management of the process of spreading the program by ASA is already consolidated, with transparent and efficient mechanisms of a self-managing character. This was undoubtedly a great learning process and achievement in itself.

Although the cost per unit is low (around U.S. $ 900 on average) the spread of the social technology in the proposed scale – one million of cisterns – will depend on the continuity of the federal government’s financial engagement, which refers to the ability of ASA to articulate and create political pressure. At present there is no threat to the continuity of the engagement of the public power.

The technology of the cistern, with some minor variations, is universal, being used by various peoples since antiquity. The originality of the program “One Million Cisterns” can be found in its enormous scale and in the role it accomplishes as an articulator of civil society organizations.

In that sense, the replicability of the experience depends not on technological or financial variables, but on the ability to generate the necessary political conditions for its implementation (articulation of organized civil society, with a good degree of resolution and participation of the public power).

Information on the program “Cisterna”, which includes the program One Million Cisterns: Site of the Ministry of Social Development: www.mds.gov.br/programas/seguranca-alimentar-e-nutricional-san/cisternas