The Bakhtiari are the largest of all Persian tribes. The annual Bakhtiari migration in April from their Garmsir (wintering ground) or winter quarters in Khuzestan, to their Sardsir, or summer pastures in south-west of Esfehan, takes four to six weeks. It is an epic of human courage and endurance in which men, women and children of all ages, with their animals and household goods, travel by five different migrations routes across some of the most difficult mountain terrain in Iran in their search for grass. This story is told by a Bakhtiari woman.

The mountain range in southwestern Iran (Zagros mountains) parallels the Persian Gulf and consists of numerous parallel ridges, with the highest peaks exceeding 4,000 m and maintaining permanent snow cover. Oak species dominate the Zagros highlands, while pistachio and almond are common at lower elevations. Hackberry, walnut, and pear trees are scattered throughout this ecoregion as well. Many large rivers, including the Karun, Dez, and Kharkeh, originate here, draining into the Persian Gulf or the Caspian Sea. Scenic waterfalls, pools, and lakes add beauty to the mountainous landscape (http://www.nationalgeographic.com/wildworld/profiles/terrestrial/pa/pa0446.html). 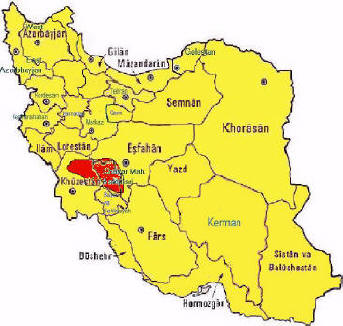 The forest and steppe forest areas of the Zagros Mountain range have a semi-arid temperate climate, with annual precipitation ranging from 400 millimeters (mm) to 800 mm, falling mostly in winter and spring. Winters are severe, with winter minima often below -25 degrees Celcius (C), and extreme summer aridity also prevails. Further south along the range, the forest becomes more impoverished and a richer steppe flora develops among the trees (http://www.eoearth.org/article/Zagros_Mountains_forest_steppe). 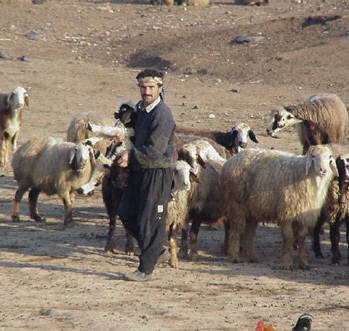 The Bakhtiari originally migrated (10th cent.) from Syria to Iran, and until the 15th century were known as the Great Lurs. In the early 20th cent., after the discovery of oil in the region they inhabit, their chiefs were courted by the British and were paid to protect oil pipelines. The Bakhtiari played a decisive part in the deposition of Muhammad Ali Shah in 1908-9. Reza Shah Pahlevi forced many of them to abandon their nomadic ways and to settle in permanent communities; after his deposition in 1941, however, many Bakhtiari returned to nomadism. 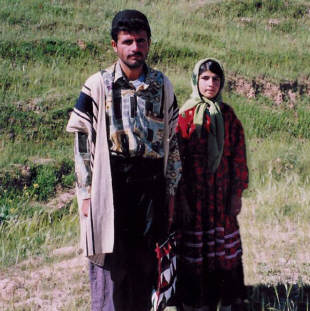 The group can be divided into two large branches, the Haftlang, with about 55 tribes, and the Charlang, with about 25. The Bakhtiari are Shiite Muslims and are famed for their courage and independence. Women enjoy a high position in the patrilineal society. They are noted in Iran for their remarkable music 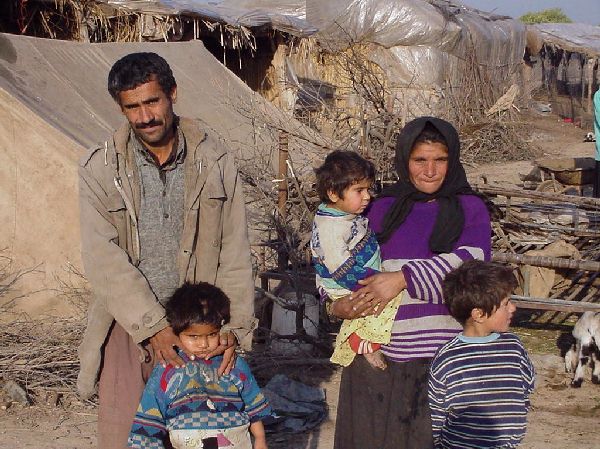 Here is a Bakhtiari woman telling her story:

My name is Mahnessa, I am a mobile pastoralist woman. For years and years, we have been the Custodians of the rangelands of the Bakhtiari Region. In the past, we moved from our wintering ground to our summer pastures. It was a long journey, about seven hundred kilometers, and we spent a whole month crossing the distance between. When we where children, we played on these lands; we know every single nook and cranny.

We always had very strong systems for the management of natural resources. Most important was the ownership of rangelands. In my childhood, I remember being beaten by my father whenever I was playing outside the boundaries of our own land. There was nothing visible between our tent and the neighbor’s tent. I couldn’t see anything. I was always astonished as to why I was beaten. There was something there that only the grownups could see, and I would too much later. The separation line between us and our neighbor was a customary law, agreed upon long before my father and his father were born. Only two siding stones marked this separation. From early childhood, our elders engraved our mind and soul the belief that we should take care of this land sustainably and be attentive not to degrade it.

My mother was a wonderful, very skilled and active woman, especially during the time of biannual transhumance. When transhuming in autumn, I remember following her when she, along with other women of our tribe, collected grass seeds to replenish the rangelands for the following year’s transhumance. When we reached our winter grazing grounds, all of the women sat together and selected the best seeds with skill and expertise. After that, they made leather pouches with several holes and filled them up with the chosen seeds. The following year, in spring, they fixed the pouches under the stomach of specially trained head goats. As they roamed through the grasslands, the goats spread the seeds, followed by the rest of the herd, fertilizing them with their excrement, and ploughing the land by trampling the soil. Consequently the rangelands where preserved and sustainably managed, and desertification and land degradation where avoided.

I am telling you this story to let you know how strong and sustainable our management system of natural resources has been since the dawn of mobile pastoralism, some 12000 years ago. We must recognise the value of this system as a sustainable way of life; respect and protected pastoralists’ rights to land resources and participation in decision-making with regard to the land; recognise the important economic role of pastoralists at all levels; and finally, respect pastoralists’ cultural identity.

Mobile pastoralists have been called the custodians of arid and semi-arid lands, and the role of women in sustainable management of these lands has always been, and still remains, crucial.

The agrarian reform law limited the amount of land a landowner could keep to one village or parts of several villages adding to the equivalent of a whole one.  The government was authorised to purchase the rest at a specified rate. A huge loophole was introduced by making an exception for “mechanised” farmlands, which led to large tracts of pastures being ploughed up in order to maintain their ownership.

Before much of the land was, for all practical purposes, under common property.  Each one of the 700 Iranian nomadic tribes (with their camps, clans, and subtribes) had their customary areas, including summering and wintering grounds and migration routes in between. Most villages also had their (often common property) rangelands for their grazing needs. One major aim of the land reform was to force the tribes to sedentarise.  Nomadic pastoralists were barred by law from grazing their livestock on their customary pastures unless grazing permits had been obtained.  Today not much has changed, and the vast majority of rangelands is still owned by the government.  Users can be given grazing permits, but these permits are short term and refer only to specific use rights.

Conflicts between nomads and farmers are frequent.

Overgrazing or the unadapted use of migratory passages are common, since traditional and customary experiences of land use are increasingly forgotten. For example the tribes have to start their transhumance before the right time and reach the summering grounds too early.

Our strategy is first of all to rehabilitate the indigenous system of management of natural resources before the land reform and nationalisation of rangeland. Valuation of the real assets of the livestock of the mobile pastoralist. Highlighting of the importance to this mobile pastoralist as a producer of the country (Nearly 30% of the read organic meat is produced by only 2% of the Iran population).

The value of the system lies in its sustainability and the century old experience.

All these traditional technologies came to us by trial and errors from 10000 years of experiences.

The Bakhtiari transhumance shows successful adaptation to changing seasonal conditions in their rangeland environment. It can serve as a living example for adapting to climate change by a flexible use of pastures and rangelands in arid and semi-arid regions. We need to convince the decision makers for the rehabilitation of this very important group of producers and custodians of rangelands.