Raising environmental awareness of journalists and the public

Uzbekistan’s mass media provide no special coverage of ecological issues. Meantime, the country is experiencing degradation of land and desertification. It is subject to draught and lack of water. Water resources are scarce.

The public will not be able to gain an insight into the situation without a free flow of information in the press, on the air and on TV. Acknowledgement of environmental problems would result in positive decisions and actions. “It is essential to start raising the ecological awareness of journalists and strengthen their links with ecologists”. This is the purpose of “round tables” and media tours organized by an NGO – the Tashkent Information Center “Environment”, for the journalists of the national and local mass media.

Around fifteen “round tables” and five media tours have been carried out for the last four years. An average of 30-40 journalists from the national, regional and city mass media participated in each of them. The outcomes included TV programs, broadcasts and publications in the press dedicated to the problems of water apportioning, land degradation, desertification, preservation of wildlife, and climate change. Enthusiastic reporters are step by step shaping the ecological network of journalists in Uzbekistan.

The NGO Tashkent Information Center “Environment” was set up by professional journalists and ecologists. It was registered with the justice authorities in Tashkent on 25 of March of 2002. The main purpose of the Center is to raise ecological awareness of the public. Nataliya Shulepina, a professional journalist (Chairman of the NGO, presently – Deputy Chairman of NGO), is the manager of ecological projects.

A joint pilot project with the newspaper “Pravda Vostoka” on publication of ecological columns was implemented in 2003. Ecological almanac “Under the sign of Aral Sea” was issued. Two-day training sessions for Uzbek journalists were held the same year with support of the OSCE Center in Tashkent and the Regional Environmental Centre for Central Asia.

The second ecological almanac titled “Let’s just write about the environment” had been issued in 2004. In 2004-2005 a number of “round tables” for journalists and ecologists, as well as the first media tour, were carried out. The third almanac with an officially accepted title “Let’s just write about the environment” was produced in 2005. These booklets, which had been distributed free of charge, contained articles by professional journalists and ecologists dedicated to the problems of water resources, preservation of biodiversity, desertification, and degradation of land. In the following years efforts to carry out “round tables” and media tours have been continued.

A project of the Tashkent Information Center “Environment” (“Ecological knowledge for the mass media and the public”) received a grant of  the Fund for Support of Non-Governmental Non-Commercial Organizations of Uzbekistan in 2008. Three “round tables” and two media tours have been held as part of this project. A website (http://sreda.ilim.uz), designed for ecological publications appearing in the Uzbekistan’s press, was produced. The fourth almanac is to be published soon.

Basic information on the country

Uzbekistan is a country with 26 million people. It is located in Central Asia, in the Aral Sea basin. Total area is 44.5 million hectares. Major rivers – Amudarya and Syrdarya – are interstate watercourses. The area of cultivated agricultural crops is 29 million hectares. Irrigated lands are of particular value. Covering 4.2 million hectares, they produce over 95 percent of the gross agricultural product. Approximately half of the irrigated land area is saline. Extensive use of pastures for cattle breeding, soil erosion, salination of land, and desertification pose a serious economic, social and ecological problem. Land degradation is also caused by waste disposal – each year the country produces about one hundred million tons of various types of waste. Shrinking biodiversity, associated with the land degradation, becomes another serious problem.

Prerequisites for the activity (socioeconomic, institutional and political preconditions

The Capacity of mass media in the country is huge. Three daily republican newspapers are published five times a week. According to the Agency on Press and Information of Uzbekistan, a total of one and a half thousand newspapers and one hundred and fifty journals are produced in the country. Besides, there are about one hundred electronic editions, over forty television studios, dozens of radio channels, and four popular news agencies. The only environmental issue – a monthly “Ecological Bulletin” – has the circulation of two thousand copies. Problems of the water resources management, salination, degradation of land are consistently addressed in “Kishlok hayeti”, a newspaper of the Ministry of Agriculture and Water Management. The analysis shows that other mass media provide occasional and superficial coverage of the problems related to the water resources management, land degradation and desertification of soil.

The legislation on mass media, which includes three laws, guarantees the access to ecological information. Access to information is also provided by the Law “On Protection of State Interests” and the Law “On Radiation Safety”, which determine that the information may not be restricted if it concerns the health and safety of people. Therefore, there are legal grounds for the journalists to report about ecological issues. Lack of adequate coverage in mass media is the result of an outflow of professional journalists, generational change, complexity of the topic, lack of communication with professional environmentalists.

In accordance with the country’s legislation on non-governmental non-commercial organizations, a groups of journalists and ecologists established in 2002 the NGO Tashkent Information Center “Environment”. Dissemination of environment-related information is its main field of concern.

Goals and objectives include improvement of the environment’s quality, expansion of the information space, raising of ecological awareness of the population.

Tashkent Information Center “Environment” encountered similar problems that other NGOs are normally facing: NGO members are busy with their primary jobs, there is a problem with the funding of projects. Strategy of the partnership (particularly with the country’s environmental agencies) proved to be efficient. “Hot topics” were prompted by the State Committee of the Republic of Uzbekistan for Protection of Nature and some other environmental agencies. Journalists met with environmental experts at the “round tables”. Experts handed hard-copy materials to the journalists, informed them about existing problems and answered their questions. Every “round table” gave a chance to generate information on three different aspects. Combination of “round tables” and one-day media tours appeared to be the most successful and efficient practice in terms of the volume and quality of the media reports. Partner agencies covered a significant part of organizational costs, including space for “round tables”, rent of buses and meals of participants.

For instance, a media tour to Verkhnechirchiksky hydro station in March of 2003 had been organized in partnership with the Basin Water Organization “Syrdarya”, which is responsible for this waterworks facility. Other partners were the Scientific Information Center of the Interstate Water Coordination Commission of Central Asia, Global Water Partnership of Central Asia and Caucasus and Uzbek Division of the International Water Management Institute. 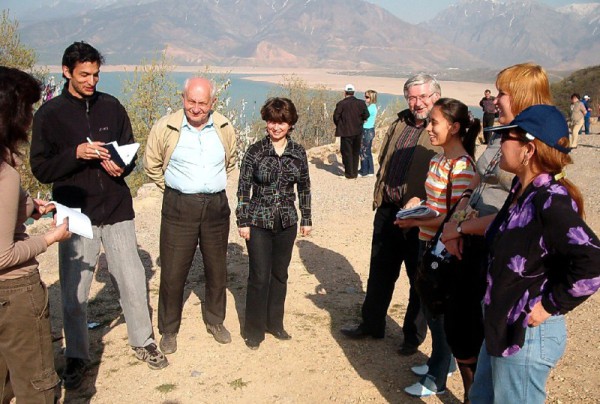 Discussion between ecology experts and journalists

After the journalists inspected the waterworks facility, which controls the supply of water into a channel, there was a discussion of the topic “How to manage water resources?”. Experts were talking about automation of the water management industry in Uzbekistan and Central Asia, introduction of the integrated water resources management system in Ferghana Valley, desertification in the Aral Sea area. Then the bus headed for Charvak water reservoir. Journalists were getting information on the way there, too. The “open microphone” provided the opportunity for most of the participants to express their opinions regarding the subject of the media tour and the “round table”, as well as to touch upon other urgent issues related to the environment of Uzbekistan.

Some participants suggested that next media tour and “round table” would be dedicated to a problem of the biodiversity preservation. These events took place in July. The Institute of Genetics and Experimental Biology of the Academy of Science, which is responsible for running a project “Preservation of wild congeners of domestic plants in Uzbekistan”, participated in implementation of these events as a partner.

A “round table” at the Institute of Genetics and Experimental Biology enabled most of journalists to discover this academic institution. Ugam-Chatkalsky National Park was the next point of destination. Six kinds of wild congeners of domestic plants are preserved and studied there, including draught-tolerant pistachio and almond. Video reports about media tours and “round tables” were shown on TV. Virtually all journalists (about forty of them participated in the tour) prepared radio broadcasts or publications in the press.

The project “Ecological knowledge for the mass media and the public” had won the budget grant, made available on a competitive basis by the Fund for Support of Non-Commercial Organisations of Uzbekistan. This was a substantial assistance to the NGO, which enabled to purchase computer hardware, and to allocate funds for creation of a web-site and publication of the ecological almanac.

Efficiency of “round tables” and media tours stimulates the interest of potential partners, who are ready to defray the costs. It is an important component of sustainability of projects on raising awareness of the journalists and the public.

The weaknesses associated with acquisition of knowledge by the journalists are deficiencies and mistakes, that journalists make in their materials. This produces a negative response of the ecologists, for whom it is very important that delivered information is fully authentic. “Corrections of mistakes” to prevent any errors should become an important component of the joint work of the ecologists and the journalists.