The livelihood and food base of people of Tharparkar depends largely on grazing animals and partially on subsistent agriculture. Agriculture is mainly dependent on monsoonal rains which are erratic and variable in quantity and to a very little extent, sweet groundwater is available at very few places.

By the initiative of SCOPE, Pakistan, more than a dozen agro-pastoral farms have been successfully set up since January 2004 The local farmers received training on pasture and agro-forestry management to foster a sustainable way to mitigate the effects of drought in an unfavorable environment.

Sindh is the South Eastern Province of Pakistan, it is spread over 140,914 sq kilometers, and the province can be divided longitudinally in three distinct sections of equal sizes. The western part is hilly, know as Kohistan; the central portion is a fertile valley irrigated by the River Indus (Nara) and in the Eastern part lays the Thar Desert. The Sindh Arid Zone comprises of the Kohistan and the Eastern desert of Thar, spread over 68,000 sq. Kms, it constitutes about 48% of the total geographical area of the province. Except for their extreme aridity due to scanty and erratic rainfall, the two areas have widely different geomorphologic characteristics and distinct profiles. Various kinds of land/soil types encountered in the Arid Zone can be placed in following board categories: Thar Region; Nara Region;  and Kohistan Region. 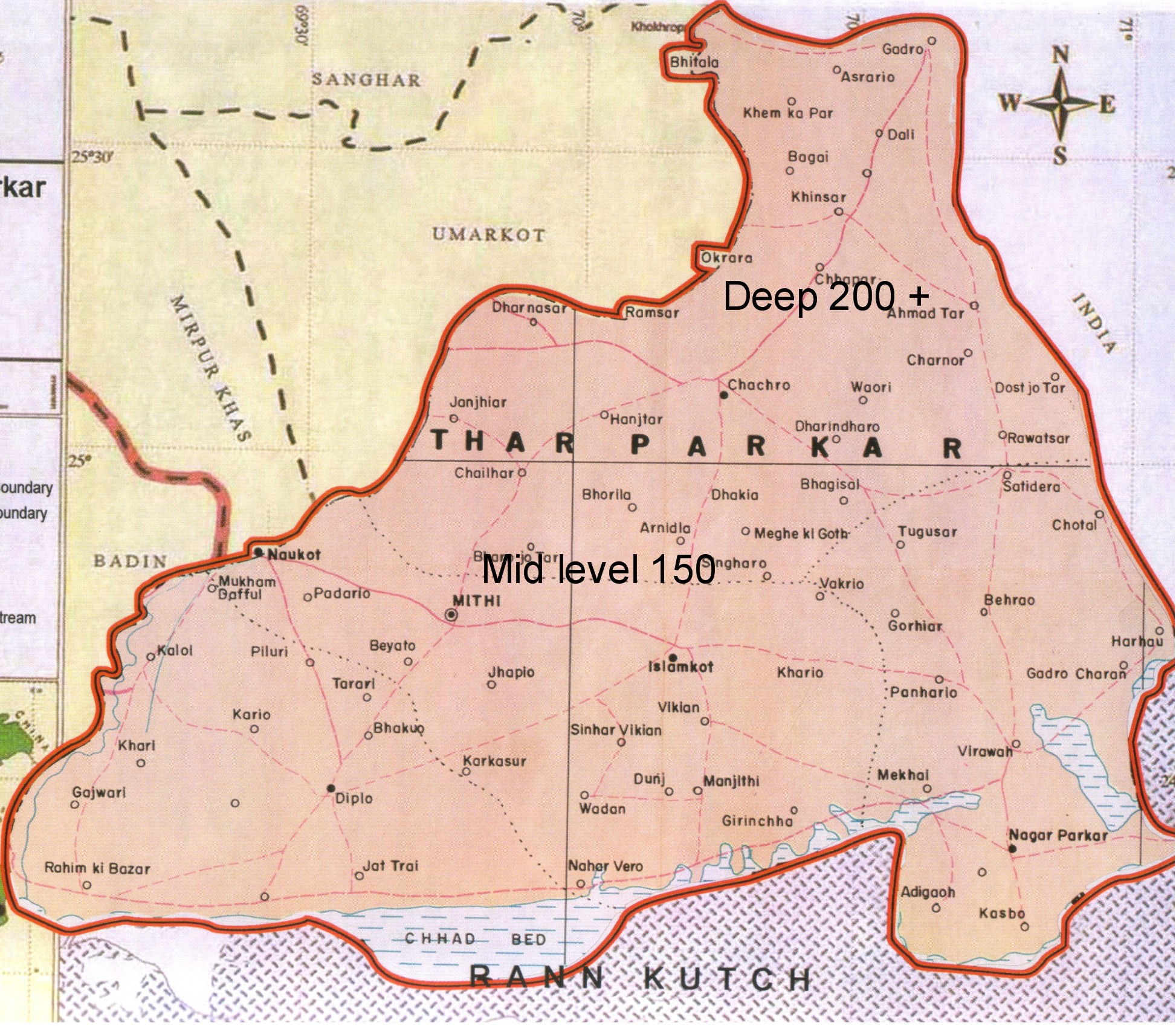 This arid and semi arid region is situated mainly in the Tharparkar district, popularly called Thar Desert located in the southern part of province; it is bounded to the south-west by Badin district, to the north-west by Mirpurkhas and Umarkot districts and to the east and south by India’s Rajasthan and Gujarat states.

It occupies an area of around 22,000 square kilometers or 15.61% of the total geographical area of the province or 2.76% of the country and has population of about one million people. The population of the district is a mix of Muslim and Hindu. 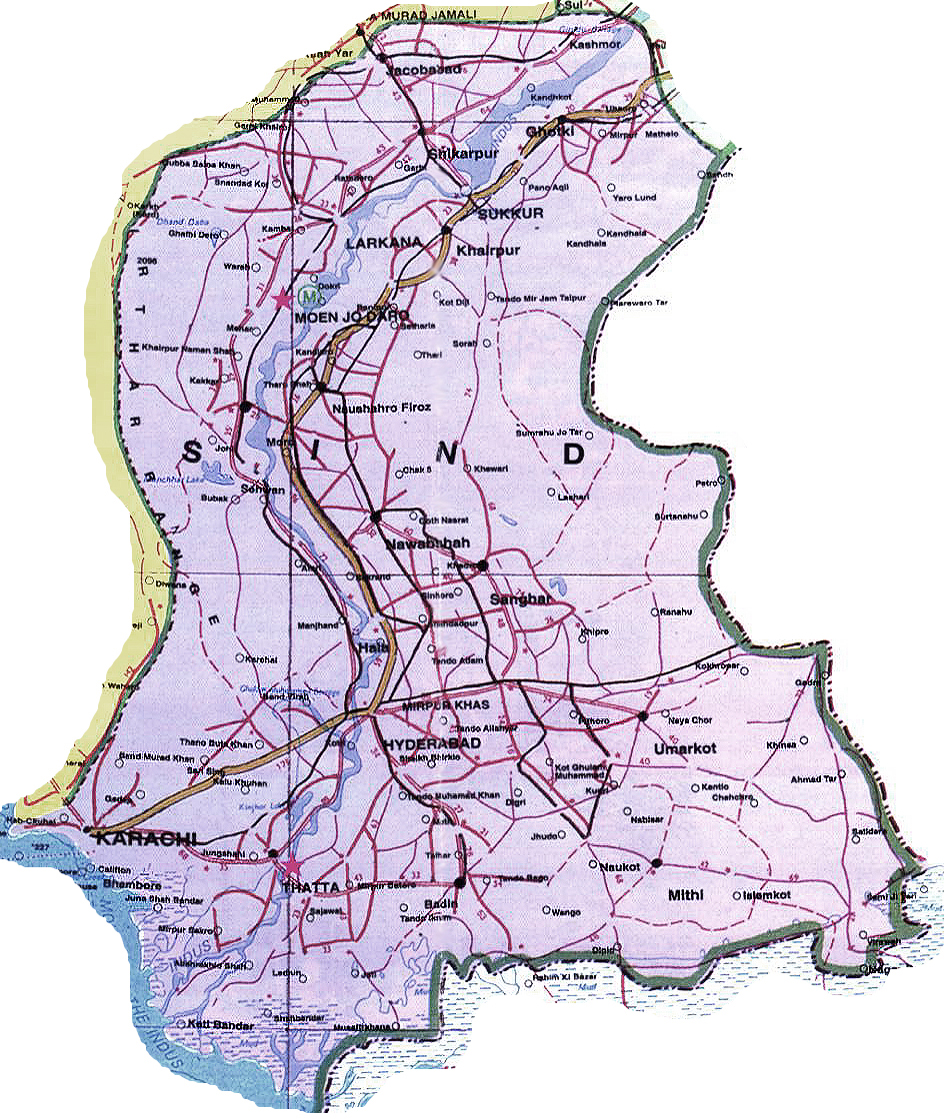 The region distinguishes by its low and erratic rainfall, high atmospheric aridity, abundant sunshine and heat. Strong dust-raising winds and sparse vegetation cover. High sand dunes and sandy plains cover 70% of its surface, and are ranked by the world Food Programme as the most food insecure of Pakistan’s 120 districts, and by UNDP as having the third lowest level of human development of all districts. The region is gifted with a large variety of natural vegetation, there being over seven hundred species of grasses, shrubs and trees. The fauna is tenacious enough to withstand extended drought, efficient builders of biomass and yet nutritious as a feed. But the problem is not lack of good species but their overexploitation leading to a greatly depleted cover, as detailed later.

In Thar Desert of Tharparkar, the monsoon season starts from 2nd week of June and continues to the mid of September. The mean annual rainfall over the Thar is around in a good year ranges between 200-250 millimeters and nearly 93% of the rain fall comes in from of few spells confined to the monsoon season that last for 65-75 days from the month of June to mid September. If rains do not fall during this period, a situation like drought emerges resulting in acute shortage of food and fodder.

Literacy and Education rates in Thar are one of the lowest in the province of Sindh. Women literacy for the district is about 5% whereas in some of the remote areas it is hardly 2%. Men literacy is comparatively better which about 15%. Health issues emanating from poor diet and resulting malnutrition are high. High incidences of low birth babies and high infant and maternal mortality rates are major concerns for health workers and policy makers.

Migration is a routine problem of this area particularly in drought times. In a normal year (with reasonable rainfall) about 20% of the population routinely migrates to find work in the Barrage Areas. These are mostly landless and share herder communities who find seasonable labour in the canal irrigated areas of Tharparkar. During mild migration, about 30-40% people migrate and during the server migration more than 60% of the people migrate to canal irrigated areas in search of food, fodder and work.

In Tharparkar even in normal years, most of the households live below poverty line. The occurrences of droughts compound their problem of poverty and make them utterly vulnerable to the situation. They find no option but to resort to borrowing money from money lenders at a rate which is ten times the bank rates, migrate to canal irrigated areas in search of food, fodder and work and take the children out of schools to work as laborers to supplement family income. The poor families affected by drought also have to find coping mechanism for survival. This includes besides what is mentioned above, putting restrictions on the available food. They would reduce frequency of meals, normally skipping one or two meals a day. In extreme cases when they cannot find loans and face food depletion at household levels, wild fruits and vegetables are eaten to keep their bodies and souls together during the drought times.

The net effect of the problems stated above is observed in the form of increase in poverty and vulnerability of the poor. The droughts leave crippling effects on their capacity to survive. In the efforts to survive, they become heavily indebted, their health is badly affected and children who are forced to abandon their studies to work as laborers.

Effects of drought on the community

The effects of droughts are severe manifested in the form of:

The formation of agro-pastoral farm had provided abundant opportunities to the village people to cultivate crops and trees for the purpose of providing fodder for the livestock in time of drought. The purpose was to develop resilience against persistent drought and food security for the local population and animals. The establishment of agro-pastoral farm contributed in forming a sustainable provision of fodder for the livestock.

An agro pastoral farm is a fenced farm owned by individual family in which about 2-3 acre land is fenced to preserve wild bushes, grasses and trees. The fence is reinforced with plantation of live thorny bushes. SCOPE supported farmers in water resource development, water conservation, selection of crops and trees, provision of seeds and plant material, through credit support. A portion of the farm is reserved for cultivation of food and fodder crops and rest of the area is further planted by grafted beri and other useful trees including Prosopis cenereria. The purpose of these agro-pastoral farms was to develop resilience against persistent droughts and to establish food security for the local population and animals. 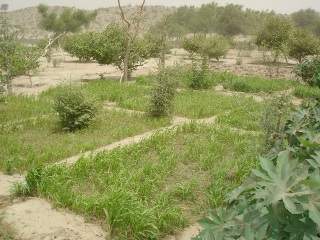 There was no concept to plant or protect trees in Tharparkar. Trees were cut indiscriminately for fuel and meeting other hut making and domestic needs and it was thought that the nature would replace those trees which were mowed down. Livestock grazes in the commons (community grazing lands) and agricultural lands without restriction which results in overgrazing of pastures and agricultural land leading to land degradation and desertification. The frequently occurring droughts made the situation worse in which many trees and bushes dried up and vanished. This situation created problems of loss of land fertility, reduction in agricultural and livestock products and food shortages. 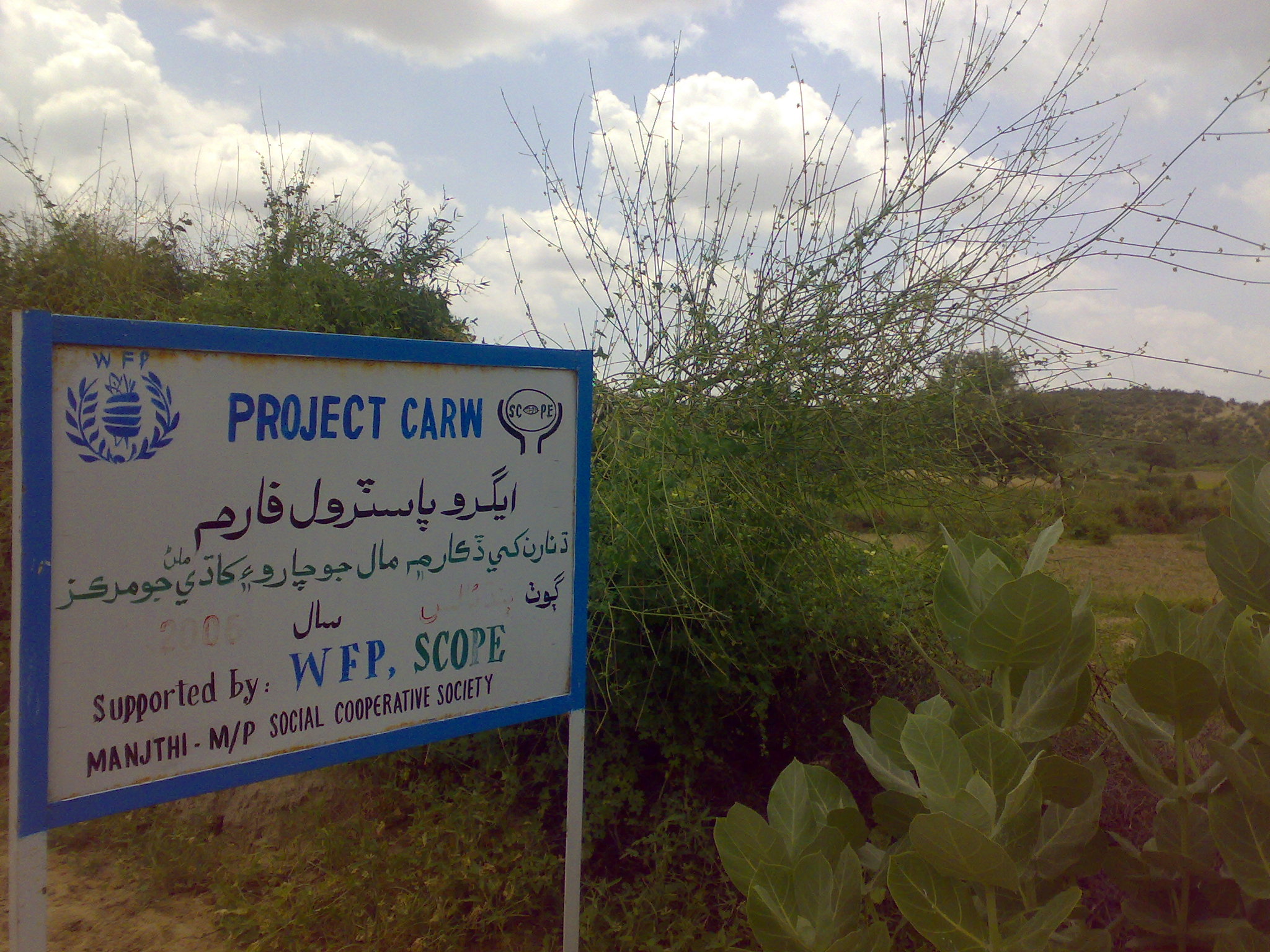 The difficulties faced were all due to not having a suitable infrastructure on the way to the villages. The villages were scattered and were difficult to access, as the link roads were filthy and uneven.

The extreme temperature due to the fact that the project was implemented in desert area, was the major hampering aspect in the implementation of the project. No electricity in these areas made inconvenience to the staff member as it was quite difficult to work under such conditions.

Since SCOPE is committed to implement the objectives of United Nations Convention to Combat Desertification (UNCCD) at the local level, therefore the Pastoral livelihood support project is a great leap forward in demonstrating concepts and methodologies as how the local communities can combat drought and desertification, while struggling to maintain their food security. 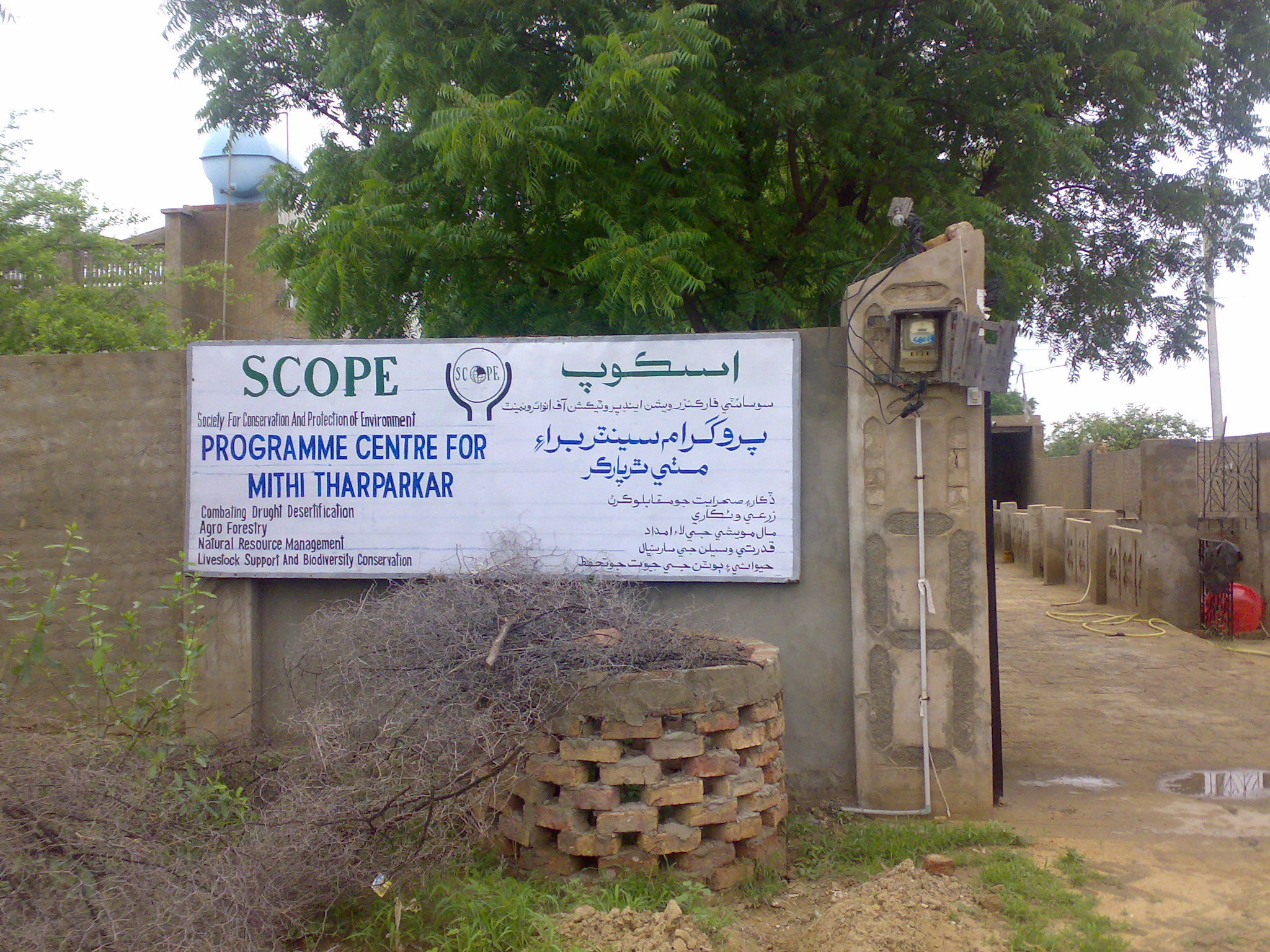 Keeping above all in mind, SCOPE is working in the arid zone of Tharparkar on drought, desertification and betterment of farmers and has set up fifteen agro-pastoral farms with the support of Misereor, Germany and World Food Programme to foster the concept of organized agro-forestry practices at these farms. The basic objectives of these farms were introducing the methods of social fencing; control grazing, pastureland management, rangeland management and importance of local bushes and trees. Besides all above these farms are the source of fodder and vegetable during drought for pastoral communities.

Besides introducing the concept of agro-pastoral farms, SCOPE is organizing workshops and community exchange programs for the capacity development of local farmers and pastoralists. SCOPE approached to Pakistan Agriculture Research Center (PARC) and Agriculture Department of Tharparkar (organ of Government of Sindh Province) to build the link between farmers and line departments. In that regard SCOPE organized many Farmers workshop followed by the field visits of agro-pastoral farms in collaboration with PARC-Umerkot and Agriculture Department of Tharparkar.

After detail consultative meeting with AZRI-Umerkot, they have given us some seed of different acacia for fodder and Two samples of pulses seed for demonstration. Above pulses seed is recommended by International Center for Agriculture Research and Dry Areas (ICARDA). The seed were distributed among farmers with detail orientation and practical demonstration in their own farms.

The success of any rural development programme is always based on the quality of local participation and partnership. Human development is essential in such programmes. SCOPE adopted a robust and sustainable approach by organizing beneficiaries into a cooperative group, namely Mainjithy Social Cooperative Society. The cooperative was given management and leadership training by SCOPE with the concept and ideology of self help.

Agro pastoral farm was a success for sustaining the lives of Thari people to some extent. Many got their alternatives and succeeded in producing the mitigation in drought. People became aware about the drought and the factors which mitigate them and alleviate their sufferings to measurable degree. Majority of people are happy with the idea and introducing it in all around their area and in the areas far away.

The above said activities made numerous impacts upon the people of Thar. They became enlightened enough to understand factors which contribute to desertification and ultimately in their hardships. They found the idea of agro-pastoral farm as a key idea which can mitigate the impacts of drought and provide them with livelihood to sustain their lives.

The programme is intended to provide the initial steps in building an enabling environment for recognition of pastoral mobility as a viable productive system. The sustainability of the project is guaranteed by the ownership of the project by the beneficiary community. Now beneficiary community is responsible for caring of all agro-pastoral farms, and they are meeting ones in a month for bringing new idea and technologies from different parts of the region.

They are now organized and a member of pastoral cooperative society, through which they can get more trainings on advance farming in dryland areas.

For programmes to be transferred effectively to the people, strong local institution, represented by participants is essential. In our case local cooperative society was nurtured and made responsible to implement bulk of programme activities. SCOPE invested a lot of time and resources in capacity building of cooperative to ensure accountability, transparency in accounts, governance and leadership.