Building on a current green revolution in the Sahel: Some lessons from farmer-managed re-greening in Niger

A recent study on long-term trends in agriculture and environment in Niger, which was done by the Centre for International Cooperation of the VU University of Amsterdam, uncovered the fact that farmers in the densely populated regions of Niger had protected and managed regeneration of trees on their farms. In some regions this process began in the middle of the 1980s – and the scale at which this re-greening has taken place (5 million hectares) has taken everyone by surprise. This on-farm re-greening has produced multiple impacts, which include increased crop production as a result of improved soil fertility, less crop damage due to reduced wind speed early in the rainy season and a longer cropping season.

Revised Short Version: The Largest Reforestation Effort in Africa Goes Unnoticed – Building on a Green Revolution in the Sahel (in pdf-format – 090914)

Today, 70% of the victims of serious and permanent under nourishment – an estimated 600 million people – live in semi-arid and arid zones, notably in Africa. The conventional wisdom is that the dryland environment in Africa continues to degrade unabated, which has a negative impact upon the food security of communities. For example a diminished forest cover causes reduced water absorption capacity of the soils as well as lower rainfall; a declining soil fertility and less resistance of food crops to diseases; a decrease in non timber forest products to the communities, and especially to women. In general less vegetation has a negative impact on the ability of communities to react to the impacts of climate change, notably reduced rainfall levels. 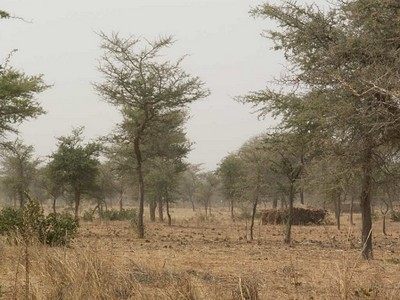 However, in several regions in Niger and Burkina Faso (Maradi, Zinder and Tahoua) farmers have begun protecting the trees on their agricultural fields by protecting and managing spontaneous natural regeneration. In the last 20 years, some 5 million hectares have been re-greened this way. 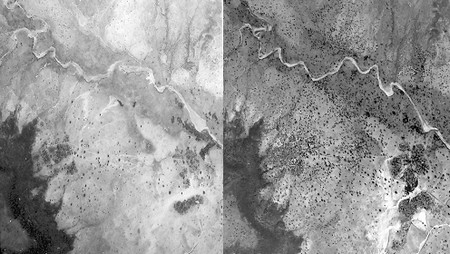 The number of on-farm trees has increased 15 – 20 times between 1975 (left) and 2003 (right) in the village of Galma (Tahoua Region). More people, more trees.  This transformation has occurred in hundreds of villages.

An increase in on-farm tree densities has led to an increase in crop yields and in fodder production. More fodder means more animals which in turn generate more manure to fertilise the soil. In these areas, contrary to popular belief, more people means more trees. Introducing more trees in the production system is a means to intensify agricultural production, and it is a way to adapt to demographic change.

During the 2005 famine, the reforested villages were better able to survive because they were able to sell firewood and fodder, thereby enabling them to buy food. Research in the Maradi region of Niger showed that in one village 35 different woody species were reintroduced by villagers, which had disappeared in the 1970s and 80s. Farmers in this same region also report that they suffer less from dust storms compared to 20 years ago and that early in the rainy season the current tree densities protect their crops better against the impact of strong winds. During the 2007 season, the rains in Niger arrived late and stopped early, yet farmers in the Maradi and Zinder regions with many trees on their fields had a better harvest than those with fewer trees.

i. The environmental crisis of the 1970s and 1980s (the need to fight dust and sand storms, land degradation, declining crop yields, etc.)
ii The perceived shift in rights to trees from state-owned to private ownership.
iii The need to intensify production systems in reaction to strong demographic growth.

Local populations used technical innovations (e.g. improved traditional planting pits, contour stone bunds) which have not only allowed them to rehabilitate tens of thousands of hectares of strongly degraded land, but it also led in many places to groundwater recharge leading to spectacular rises in water tables. These positive interlinkages are taking place under conditions of increasingly controlled grazing and more intensive forms of livestock management. This positive spiral helps families to secure their livelihoods and has positive effects on food security, levels of nutrition, reduced vulnerability to drought and decreased incidence of conflict, as there are more resources to share.

This farmer-managed re-greening in Niger covers at least 5 million ha. The implication is that farmers have added each year during a period of 20 years an average 250,000 ha. This has never been achieved by any tree planting project in Africa. This has largely gone unnoticed by national and international agencies, and the scale at which this re-greening has taken place has taken everyone by surprise.

Five million hectares at an average of 40 trees/ha implies 200 million new trees. If each tree produces an average annual value of one Euro per /tree (firewood, fodder, fruits, medicinal products, improved soil fertility, increased crop yields, etc.) this means an annual production value of Euro 200 million. This does not yet include the value of the carbon or timber sequestered by the standing tree stock (asset building). If 4 million individuals are concerned by re-greening, this means an average annual benefit of 50 Euro per capita, whereas average annual per capita income in Niger is in the order of 280 US $.

Which are some of the measured or perceived impacts of this farmer-managed re-greening? 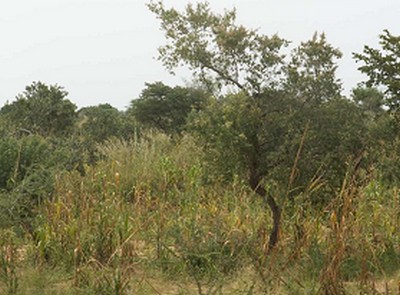 The field above was almost barren in 1985. By protecting and managing spontaneous natural regeneration farmers have created more complex, productive drought-resilient farming systems, which integrate agriculture, livestock and forestry. 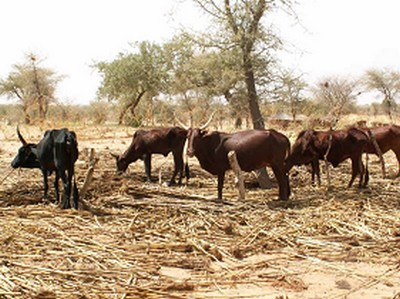 The cattle above are fed crop residues in June 2006 at the end of the dry season. All manure is restituted to the fields. In the background numerous acacia can be seen.

ChallengesIn the current context of the food crisis, climate change and rapid demographic growth, the challenge is to quickly move from research to substantive action. How to improve and expand tree-based production systems in the Sahel based on farmers managing on-farm natural regeneration? There are several lines of action needed:

Organisation and key partners: Research done by Centre for International Cooperation, VU University Amsterdam, follow up of activities is done by a coalition of CSO and research partners, among which Both ENDS Amsterdam, IUCN Netherlands, Sahel Eco Mali, Réseau MARP Burkina Faso, Tree Aid and others.

The initiative itself is taken by individual farmers in the Sahel, maybe even some 4 million of them.

As this case has described, promoting farmer-managed natural regeneration in the Sahel helps develop more productive and more sustainable farming systems, while also contributing to realizing MDGs 1 and 7. These trees are capital assets, which produce a stream of annual benefits. Not surprisingly they are carefully managed and protected at no cost to the State. Field visits to other Sahel countries have uncovered other examples of on-farm re-greening with a potential for scaling up.

It is important to note that promoting tree and biodiversity regeneration and managing natural resources are social processes. It deserves emphasis that the most impressive examples of large scale restoration of drylands have been led by farmers in what seems an autonomous process. E.g. in Zinder, Niger, a handful of CSOs with in-depth understanding of local ideas, needs and obstacles were able to offer catalytic support. Communities collectively decided to pursue these objectives, which was crucial since otherwise they will not be achieved. Therefore, support for and strengthening cooperation and community based institutions is a precondition for success. It requires that successful farmers are enabled to present their own experiences to other farmers and communities. Local and national CSOs benefit from exposure to such local know how as it enables them to help facilitate a wider exchange of experiences. It also implies that land and tree tenure policies and administration mechanisms need to favour local management of natural resources.

World Resources Institute (2008) Turning back the desert: how farmers have transformed Niger’s landscapes and livelihoods”, in: World Resources Report 2008 : pp 142 – 157.

http://vimeo.com/4163389 shows a film from Sahel Eco on an exchange visit between two villages on re-greening knowledge and techniques.

Revised Short Version: The Largest Reforestation Effort in Africa Goes Unnoticed – Building on a Green Revolution in the Sahel (in pdf-format – 090914)