The environment of the valley of the Senegal stream is very fragile and exposed to several factors of deterioration. Indeed, this small strip of less than 20 km along the Senegal stream constitutes the main agricultural zone of the country. This valley plays an essential role in food security at the national level. At the same time, it also concentrates on the main zones of grazing. In this context, all relative action for local development and particularly the relative actions to food security that require hydro agricultural planning having certain impact on local resources (water, vegetation and soils), from where the necessity to take in account the environmental aspects to preserve all deterioration of resources or otherwise to attenuate the effects, in this context of persistent drought and pluviometric risks, the rural community living from husbandry in this zones are very vulnerable because of the pressure that is exercises on the woody resources due to its use as sources of energy or its deterioration linked to the agricultural planning. The women are the most directly touched by this vulnerability.

Mauritania is a country of the Sahel where more than 2/3 of the national territory is essentially deserted. The zone of intervention is located in the valley of the Senegal stream, in the South Mauritanian. Corresponds administratively to the Department of BABABE (48.867 inhabitants), in the Region of Brakna. It is one of the region’s most populated of Mauritania and has a total of 228.559 inhabitants (107.631 men and 120.928 women), which represents 10% of the country.

In the zone of intervention, their families are too big. They count 10 to 15 people (grandparents, parents, uncles, aunts, sons, etc.). Most part of the households is poor. The main economic activity is husbandry (cows, goats, sheep), completed by the cultivation of Diéri and of irriguee. In the village there is also a feminine cooperative that counts today 504 adherents (at least a woman per family is affiliated). The members of the cooperative practice market gardening and artisanal and commercial, but the production is low and the incomes very small.

The strategy adopted was to include a process of popularization of biogas in these zones on several stages. The first stage was to put in place a pilot unit having all assets for the setting up in place of a system. It is thus in the locality of Ari Haara has been targeted like demonstration site:

In the phase of demonstration, 600 women are the main group targeted by the intervention, because it is theirs that correspond to the tasks of chore of wood and the preparation of family meal. They are also assigned to look for water for the house, of the market gardens, the small ruminants, the children and the household. They are mostly illiterate and take the load of the households when the men leave for the city to achieve seasonal works. Among these women, the 504 adherents of the feminine cooperative of the village will benefit directly from improvements of their market garden production by the use of the remaining sewage of gas production as biologic manure and, in the case of surplus, the sale of manure to other producers/traces on the zone.

The 3500 inhabitants will benefit from the improvement of hygiene conditions in the villager environment, thanks to the significant reduction of excrements from animals that will be used like raw material for the production of gas. They will also take advantage of the improvement of their food with the increase of the quantity and quality of horticultural product by the use of biologic manure and the improvement of cultural technique.

Finally, the whole community of BABABE will benefit from the reduction of the pressure on the woody resources, by the reduction of wood cutting in the zone. The population that indirectly benefit is estimated therefore at 26.543 inhabitants.

The dung’s of cows and of small ruminant that constituted at time the waste that gave a face of Animal Park in the villages is today a renewable energy source for the families of breeder: 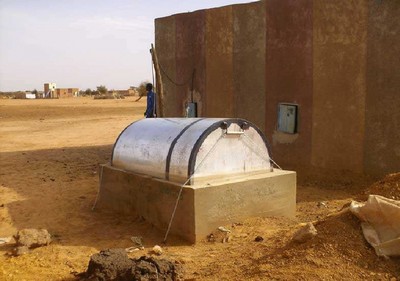 The biogas production unit behind the house 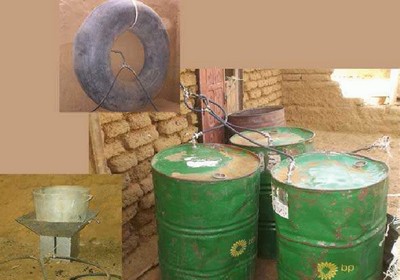 The kits put in place are very easy to conceive, to maintain and to manage. The capacities of women have been sufficiently reinforced so that it assures the duplication, the setting up and the management of kits of biogas. The organization put in places through the cooperatives will permit to promote and to popularize the kits of biogas.

Close to 100 families cover their needs in energy with cooking in the locale of Ari Hara and Dioudé Djéri. The feminine cooperatives that are active in the market gardening use the sewage of production units as fertilizing. There exist locally women capable of duplicating and to assuring the maintenance and the maintenance of the kits of biogas.