A case of Potshini in KwaZulu-Natal, South Africa

A densely populated rural community in the foothills of South Africa’s Drakensberg refuses to give in to land degradation and poverty. Most people practice subsistence agriculture, growing mainly maize and beans for home consumption. Cattle are grazed in communal lands in summer when the crops are in the fields. In winter, after harvesting, cattle are allowed to graze on crop residues in the crops fields. With the help of the Farmer Support Group (FSG), farmers, especially women have been developing more sustainable and productive systems of natural resource management. Using participatory action research, cross visits and participatory monitoring and evaluation by the farmers themselves, FSG and approximately 60 farmers shared and experimented with new technologies in farming, including water conservation measures such as trench beds, cover crops and tower gardens.

Various stakeholders participated in different elements of the programme. The successes of this joint initiative include reduced soil erosion, recharged water tables, increased access to water for agriculture, enhanced food security, increased food nutrition and health, increased crop yields, and increased ability to finance household expenses. One of the major reasons for the success of this project was the participatory, collaborative manner in which this initiative was managed.

The foothills of the dramatic Drakensberg Mountains present an idyllic picture of rural Africa: small square and round mud-huts punctuate the landscape and goats and cattle roam freely along the mountainside. Fields of maize, beans and potatoes are interspersed between the homesteads. However, a closer look reveals a landscape scarred by deep gullies, gouged out by the heavy summer rains that rush down the steep slopes, robbing the area of its precious topsoil. Decades of overcrowding – an artefact of discriminatory Apartheid land policies – and the resultant poor land-use practices are largely to blame for this excessive soil erosion and the nutrient degradation of the farmers’ fields. 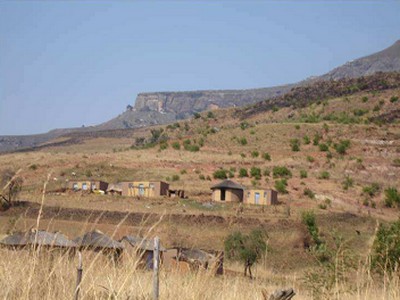 The practices associated with keeping cattle also contribute to the degradation of the landscape. Cattle are usually driven along the same paths to and from grazing areas, which over time leads to the development of gullies. Communal ownership and management of the grazing lands provides little incentive to households to limit their number of cattle, leading to overgrazing and thus exacerbating the problem of land degradation.

In the Potshini community in the uThukela basin of KwaZulu Natal, South Africa, the Farmer Support Group (FSG) has been assisting farmers and other land users, especially women and the poor, to develop more sustainable and productive systems of natural resource management. Institutional development and entrepreneurship are important aspects of this. FSG is the community development and outreach division of Centre for the Environment, Agriculture and Development (CEAD) at the University of KwaZulu-Natal (UKZN). FSG uses participatory and innovative methodologies in education, training, advice, technical support, and partnerships.

Initially, FSG was contracted by the government to conduct a Landcare project in the area. After these projects, FSG continued to serve the communities as they still confronted problems related to sustainable land management. 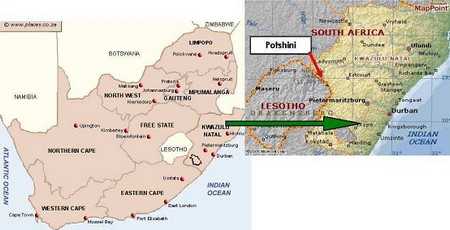 Potshini is a sub-ward of Okhahlamba Local Municipality which is one of five local municipalities under Uthukela District Municipality in KwaZulu Natal. The area falls under the traditional leadership of the Amangwane Tribal Authority.

Most people practice subsistence agriculture, growing mainly maize and beans for home consumption. Cattle are grazed in communal lands in summer when the crops are in the fields. In winter, after harvesting, cattle are allowed to graze on crop residues in the crops fields.

FSG, together with the School of Bioresources Engineering and Environmental Hydrology (BEEH) implemented a Smallholder Systems Innovations (SSI) Project in the area between 2005 and 2008. The main aim of the FSG project was to involve farmers in seeking and adopting appropriate soil and water management innovations, drawing on their own experience and knowledge. Participatory action research (PAR) techniques were used to achieve this.

FSG implemented the SSI project in Potshini by setting up two Learner Groups of about 30 people each. These grew from two Farmer Groups that had existed prior to the project. To allow broader participation, the project used a community facilitator to communicate project activities to its members.

Between 2005 and 2007, these Farmer Groups shared and experimented with new technologies in farming, using Farmer Life Schools (FLS), an innovative methodology of working with groups in participatory action research, and cross visits. Participatory monitoring and evaluation by the farmers themselves was also facilitated through these groups.

In the Farmer Life Schools, farmers and facilitators interacted as co-learners in sessions held regularly to deal with specific issues. The needs of the participating farmers and the objectives of the project guided the curriculum covered during the various sessions. People considered to be knowledgeable on various topics were invited to address specialised topics as and when necessary. The FLS agenda was developed through discussion between farmers and facilitators and included issues that affected farmers in their fields and life in general.

The curriculum developed included topics such as nutrition; seed bed and seedling production; soil fertility; tree planting; pest and disease control, garden design, water use; and, value addition and food processing; marketing and business development; and the challenges of HIV/AIDS on livelihoods.

Two hour sessions were held in a farmer’s field. Sessions included reviews of previous sessions, discussions and sharing of knowledge and experiences. At the end of each session, farmers received assignments to implement what was learnt. Farmers shared the outcomes of their assignment at the start of the next session. As part of the FLS, farmers evaluated the sessions immediately at the end of each.

Farmers undertook cross visits to learn and share knowledge. They also visited institutions outside Potshini. Cross visits were included to further reinforce the theme of the project, i.e., water systems innovations. Cross-visit were undertaken between 2005 and 2007. The first visit in 2005 was to a neighbouring community to see how the community monitored the effects of community-lead rehabilitation of degraded land. Two cross-visits in 2006 looked at experiments on vegetable options and production techniques and at the water harvesting innovations by smallholder farmers in another province. A cross-visit in 2007 looked at various innovations of smallholder farmers in a semi-arid area. Farmers were encouraged to take up some of the ideas from cross visits and to implement them on their farmers, even on an experimental basis. In addition, field days were held periodically to share information on the innovations that were being experimented with in the project.

Most members acquired knowledge on water conservation and making gardens. Knowledge on organic farming was acquired through sessions on compost making and organic pest control.

Some water systems innovations developed or applied via the project included:

Increased food nutrition and health: Acquisition of knowledge by households resulted in better nutritional status of the households. The project activities increased household access to balanced nutritious diets (including fresh vegetables) and resulted in healthier eating habits. For example, 54% of these households improved the variety of fresh healthy foods they consumed. Many participants in the project indicated that their health improved somewhat as a result of the project.

Impact on crop production: The project demonstrated that the minimum tillage technique, which the project assessed against conventional tillage, resulted in maize yield increases of 168% above those of the conventional treatments. Survey results showed that maize production per household increased significantly after the introduction of the SSI project.

Increased ability to finance household expenses: The project had a definite influence on the ability of the participants to finance expenses at household level. Almost half of the participants were able to build or repair houses or other structures at the homestead. Several farmers indicated that the project had allowed them to send children to school. The farmers indicated that this was either through income realised directly from selling produce or by saving on the money that could have been used for buying food.

Increase in social assets: Social assets are the networks, social claims, affiliations from which households could draw bequests to meet some of their livelihood requirements. The project increased participants’ confidence motivating the groups to work harder, created a willingness and opportunity for sharing knowledge, and strengthened local networks.

Increased access to indigenous knowledge: Some 26% of participants accessed knowledge on seeds, 37% on soil fertility, and 30% acquired additional knowledge on pest control.

High level of community acceptance: Participants noted that the project was well accepted in the community, which was not common in the past.

Multi-stakeholder collaboration: Although no memoranda of understanding were signed to institutionalize the interaction of the stakeholders in Potshini, a general understanding emerged on how the interaction was managed. Each institution undertook its activities while recognizing the strengths and weaknesses of its counterparts. Therefore, while impacting on the perceptions of the various stakeholders on their notion of multi-stakeholder partnerships, the project also allowed them to support each other for longer term sustainability of development in the area. The project allowed an understanding of the breadth of issues that have to be dealt with when uplifting farmers. Stakeholders thus realized the need to work together and acted upon this.

Lessons learned (strength & weaknesses)
The various assignments in the farmer learning groups strengthened the capacity of farmers to experiment and innovate. This practice of discovering solutions to their production challenges will continue after the end of the project, thus contributing to enhanced sustainability.