After an exploratory mission in January 1999 that permitted to meet the persons heading the association ” Choix de vie” and the municipality, to understand the issue of land and the inhabitants, CARI undertook an action of rural development on the territory of the council of TINZAOUATEN since February 1999.

At the end of the touaregue revolt, in 1993, numerous nomadic families settled in the valley of the council of Tinzaouaten, situated in the Adrar of the Iforas at the border between Mali and Algeria. This valley spreads to about five kilometers and the banks of the wadi are constituted of terraces alluvium with beneath permanent underground water. It is therefore a source of wealth for oasis agriculture but, in case of strong rises of the water level, that wadi can annihilate the work of the farmers. Those farmers, newly settled supported by the CARI since 1999, wished to arrange this space in order to install a real oasis and to thus assure steady incomes. 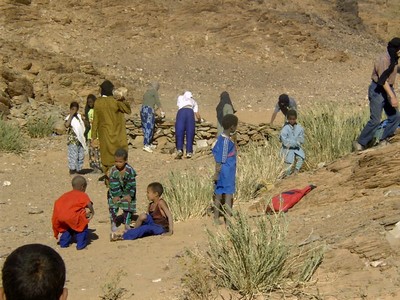 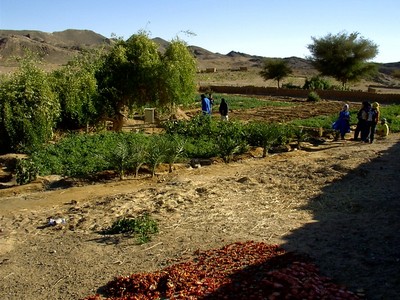 « Water is the most precious”; it make things easier but cannot remove the desert. What is done with the gabions at Tinza is a good thing. With little means one can live in the desert, means don’t remove the desert but only the difficulty of the desert”. Ahmed Ahmed, chief of Ifergomoussen faction – Tadjit – Adrar of Iforas (March 2003)

The project began in 1999. Forty gardeners of the council are directly interested to the project. By their mediator, it is the set of 500 inhabitants of the council (that have domestic ties with several thousand of nomads) that benefit from the program. Several tenths among them have been associated to its technical implementation (construction of gabions, of pipe wells, of micro dams, of reforestation,…).

One agro ecologist charge de mission of CARI pays a visit to the place every winter, as well as casual interveners (environmental education, animation…), several volunteers of CARI and various NGOs specialized and present in the region (as ACF who constructed mechanically a pastoral well for the project and a technician for the palm).

The first mission in 1999 was financed in a great part by the foundation ” A world for all ” and the participation of the adherents of CARI. Thereafter, the CCD supported the project, then the general Council of Hérault, the French ministry of ecology and of sustainable development, the NGO Medafrica and lately the IREMLCD/CILSS.

Name of the structure:

Center of actions and international realizations (CARI), animator and member of the desertification work Group (GTD)

Objectives of the structure for the fight Against Desertification:

The essential point is to be attentive to that the actions carried out should continue on the long run and especially with resources available in the concerned territory. For example, the forest trees are produced from local seeds and it is the associations of the area that demand to plant them and assure their everlastingness.
Information and training of the inhabitants of the council on the themes of the project (protection of lands and water) were essential and continuously took place throughout the project. For example, in the beginning, the idea of a new regional development was not shared by the majority, but with years, the inhabitants understood the role of gabions to recreate a bank, that of micro dam for the restoration of water level, and of normalized piping of wells to manage the irrigation water.

Strong points of the project:

Difficulties encountered:
The training of the gardeners was done in stages and the setting up of classic educational tools was long because the interlocutors, nomads, didn’t remain on the same spot for a sufficiently a long time so that they could become demonstrative.
The existing demarcation of the gardens with banco walls permitted to reduce the disastrous consequences of the straying of animals. But, apart from the gardens, reforestation is difficult because it remains at the mercy of animals. In other words, the creation of income generating activities, as the market gardening, is accepted better than the actions for the environment, whose effects are indirect, even though they improve the quality of life of the inhabitants.