A municipal plan of action for urban agriculture in Nouakchott – Mauritania

Food security, fight against poverty and urban management in a context of scarcity of water resources – profile diagnosis (2001-2004)

In a process of research – action initiated by the French-speaking Network for the development of urban agriculture, a profile diagnosis on agriculture in the city of Nouakchott is elaborated. It is about a diagnosis and an analysis of the constraints to which is confronted agriculture in the city (deficit in water, land issues, sanitary risks) and of the potentialities and opportunities that it offers in the setting of the struggle against poverty, food security and the fight against blindness, in the first place. And secondly, to elaborate with all actors of the city a municipal plan of action permitting to mitigate the identified constraints. The problems of urban agriculture arise from two main factors: the lack of water resources and land issues.

Revised Short Version: Reviving the Green Lungs of the City- Planning for Urban Market Gardens in Nouakchott (in pdf-format – 090914)

The process of research – action has been conducted with the implication of all actors (market gardening producers, agricultural technicians, the municipal authorities and the development partners through surveys, discussions, technical studies and concertation workshops.One can note four essential phases in this process:

Mauritania, which is 3/4 Saharan is one of the most affected Sahel countries by drought and desertification. Rainfall is low (less than 300 mm of rainfall/year). The droughts periods of the years 1970 and 1980 entailed a massive rural exodus of the population towards Nouakchott, the administrative capital. One of the strategic answers provided by the powers that be and the population were the creation of market gardening spaces generally in the periphery of the cities. The city of Nouakchott is constructed in the midst of the cords of dunes, in a saline depression on the Atlantic coast. In that context the creation of urban market gardening spaces was an answer to the issues of food security, to the progress of dunes and the absence of green lands. But the context was marked by constraints linked to the scarcity of water resources, and land issues. Two environmental stakes were seen for water resources: (i) the overexploitation of underground water precarious resources on the market gardening sites of Dar Naim; (ii) the reuse of domestic waste waters with health risks for the population. It therefore clearly appears that in Nouakchott the survival of urban agriculture and green lands goes through a good mastery of water resources intended to the irrigation of the market gardening sites.
The urban stake (land tenure and access to land): The market gardening sites are situated at the center of the city (site of the Sebkha) or at the periphery (El Mined, Dar Naim, Toujounine). They constitute, today, in the full spatial development of the city, the unique green lands. They are at the centre of enormous land tenure appetites from the ”builders ”. Those sites are threatened by the expansion of the habitat. The development of the city through rural exodus encouraged the emergence and the multiplication of peripheral residential areas. In these quarters poverty is deep; the new comers are not educated and are without qualification. In Nouakchott, 20.6% of the population live below the poverty line, that is to say with less than 1 $US/day (Marguiotta). The market gardening sites of the city of Nouakchott became enormous suppliers of jobs. More than 6,000 families live directly on this activity (operators and dealers).

The adopted strategy was to engage in a process with several stages starting from a participatory appraisal, the setting up of a three years action plan, to the elaboration of micro projects. The process is driven under the municipal anchorage and implied different actors concerned: the technical institutions of agriculture, the development partners, the funding bodies and the urban market gardeners.

The elaborated municipal action plan addresses the need of developing agriculture and to preserve agricultural spaces in urban milieu. The plan of action has been broken down into projects aiming at eliminating mainly the constraints linked to the insufficiency of water resources and access to land. It promotes new techniques and agricultural technologies and develops a new funding approach in adequacy with the local realities.

Agriculture in the midst of the city, new spaces, technology and another vision for a better integration in urban management (photos: Tenmiya) 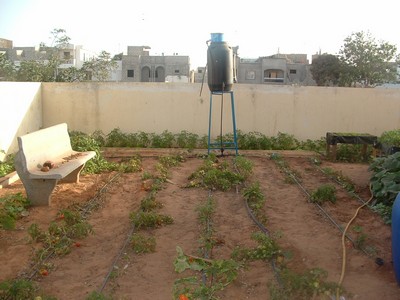 The municipal plan of action permitted to capture the attention of the funding agencies and development partners such as UNDP, the Spanish cooperation or the United States embassy in Nouakchott. The farmers also showed a full interest for the process while participating in the elaboration of the action plan and the identification of projects.

In the plan of action, the results haven captured the attention of the recipients (farmers and local authorities) include mobilization and the management of water resources. It implies the realization of infrastructures (waste water treatment units, drip irrigation systems) and the improvement on production.

The environmental constraints of the city and the vulnerability of water resources have been identified. Farmers are conscious of the importance of their mode of action and techniques which should be implemented to manage that vulnerability. In the municipal action Plan, they opted very clearly for an agriculture scheme that perfectly integrates itself in the urban environment with new methods and a more aesthetic vision.The other actors (technical and financial institutions) were also sensitized on their responsibility and their input in sustaining the urban agriculture.

There is a true partnership between the farmers and the municipality of dar Naim. The last mentioned last engaged itself a lot more in the mobilization of the development partners in favor of agriculture.

Since 2005, the partners to development such as PNUD (UNDP), the Spanish cooperation and international NGO CIVES MUNdI) mobilized themselves to support the implementation of the municipal action plan, notably for the mobilization of water resources and the promotion of new technologies in horticulture.

Revised Short Version: Reviving the Green Lungs of the City- Planning for Urban Market Gardens in Nouakchott (in pdf-format – 090914)