Reflections from the Youth Forum 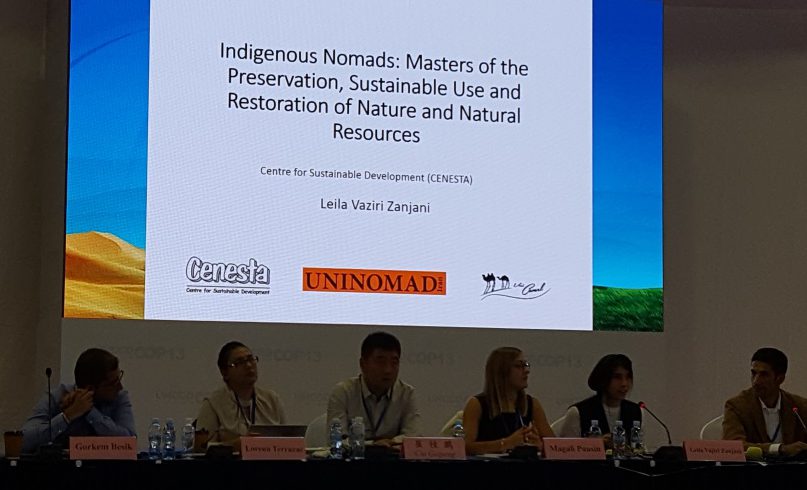 The Youth Forum of the UNCCD COP 13 was held on the 8th of September 2017. The morning started with an inspiring and hair-raising speeches by Monique Barbut the Executive Secretary of the Convention and other Chinese Officials.

Next, a panel discussion with speakers of different backgrounds and experts discussed the many ways that restoration and awareness raising need to be mainstreamed. From engaging Hollywood to setting guidelines for green finance relative to economy and country. Here I learned that China is one of the most successful countries in engaging private sector and industry in restoration projects and agriculture. Later we would see the full scale of this engagement during the field visit on September 10th. In 1992 China National Sand Control and Desert Industry Society was established in consequence to the birth of the definition of “sand industry” by a famous professor. This society pays special attention to scientific and academic research and has mobilized millions of dollars over the years for in-depth research into sand control. This society has played a crucial role in innovations for controlling sandstorms and unsustainable practices in China.

The day continued with presentations from the youth participants including my own presentation. It was interesting and useful to see the diverse experiences of the youth from various countries and schools of thoughts in withstanding desertification and restoration programs. Here I noticed that the very short duration of the forum allowed little time for transfer of knowledge and experience among the more experienced and learned and the youth participants.
The last event of the day was a short but active group discussion. I was part of the Research and Academic Group. We brainstormed the ways and methods that these organizations could apply to attract more young people to desertification action. We summarised our discussions into 11 main points and presented them to the other groups.
I ended the day by attending a side event organized by the University of Bern on the World Overview of Conservation Approaches and Technologies. Here five cases of application of an economy of scale in Sustainable Land Management were discussed in various countries such as Morocco and China. I enjoyed the event as it focused more on community engagement and less on large-scale industrial land management.

On September 9th, the youth participated in the CSO open dialogue during which CSOs from around the world including Vietnam, Brazil, and Georgia presented their efforts in SLM, LDN, natural tragedies occurring in their countries, obstacles, threats and achievements. It was rather disappointing to see that the majority of the national delegates were not present and the wonderful work and woeful prediction of the climate scientist were presented to an empty hall. However, it was an exhilarating moment to listen to Andrew deliver the youth statement. During her opening speech, the Executive Secretary of the Convention stated her strong and unrelenting support for CSOs and emphasized their important role in implementing SLM with people on land.
I continued the day with some meetings with my colleague who was also participating as a CSO representative and board member of the Drynet Network as well as other members of the network. I proceeded to spend the afternoon in the GEF Day at the Rio Pavilion. The panel discussion on Innovation, Science and Technology were particularly interesting with scientists presenting their work and achievement in LDN and SLM. I managed to make some good contacts during this session and learned much from Professor Barron Orr, etc.

Lastly, I participated in a side event organized by FAO, Islamic Republic of Iran and the Kingdom of Netherlands on Drought and Agriculture. I met the Iranian Delegate for a brief moment during this informative event.
The third and last day of the participation of the youth at the COP was a field visit to the Kubuchi Desert not far from The Ordos. This dessert is a successful example of sand control in Inner Mongolia and the Party Committee of China, as well as the Government of Inner Mongolia, have invested billions of dollars in their successful restoration project. This project was particularly interesting for as the situation is rather similar to many of the deserts and highly degraded lands in Iran. Iran too experiences severe water and wind erosion.

Due to unsustainable and short-term gain oriented management plans of natural resources Iran went from flood destruction to wind erosion in just a few decades. As an ecologist and environmental expert who has been working on the ground for the past 2.5 years, I have become quite cynical and doubtful of the future of land and water. With climate change intensifying the unfriendly conditions in the middle-east, it was relieving to see a successful example of combating against wind erosion in Inner Mongolia. Using simple techniques and natural elements (twigs) foursquare shapes are built on the sand to consolidate and fix the sand. At the same time, appropriate and native plant species are planted to increase the vegetation cover which doubles the fixation effect. This process has created an oasis in the middle of a sand dune desert. I felt a certain kinship to this environment as it used to sustain the nomadic people of Inner Mongolia for centuries since I work with the indigenous nomads of Iran very closely in SLM and LD.

All in all, I believe that the youth forum was successful in its agenda to bring people from various backgrounds together and to raise awareness on the role of youth in SLM and LDN. However, this forum was very short. We had no direct contact with our respective delegates and the governments were not familiar with the event. This was a missed opportunity a for both sides.

Please check your feed, the data was entered incorrectly.