Reflections on the 2015 Caux Dialogue On Land and Security 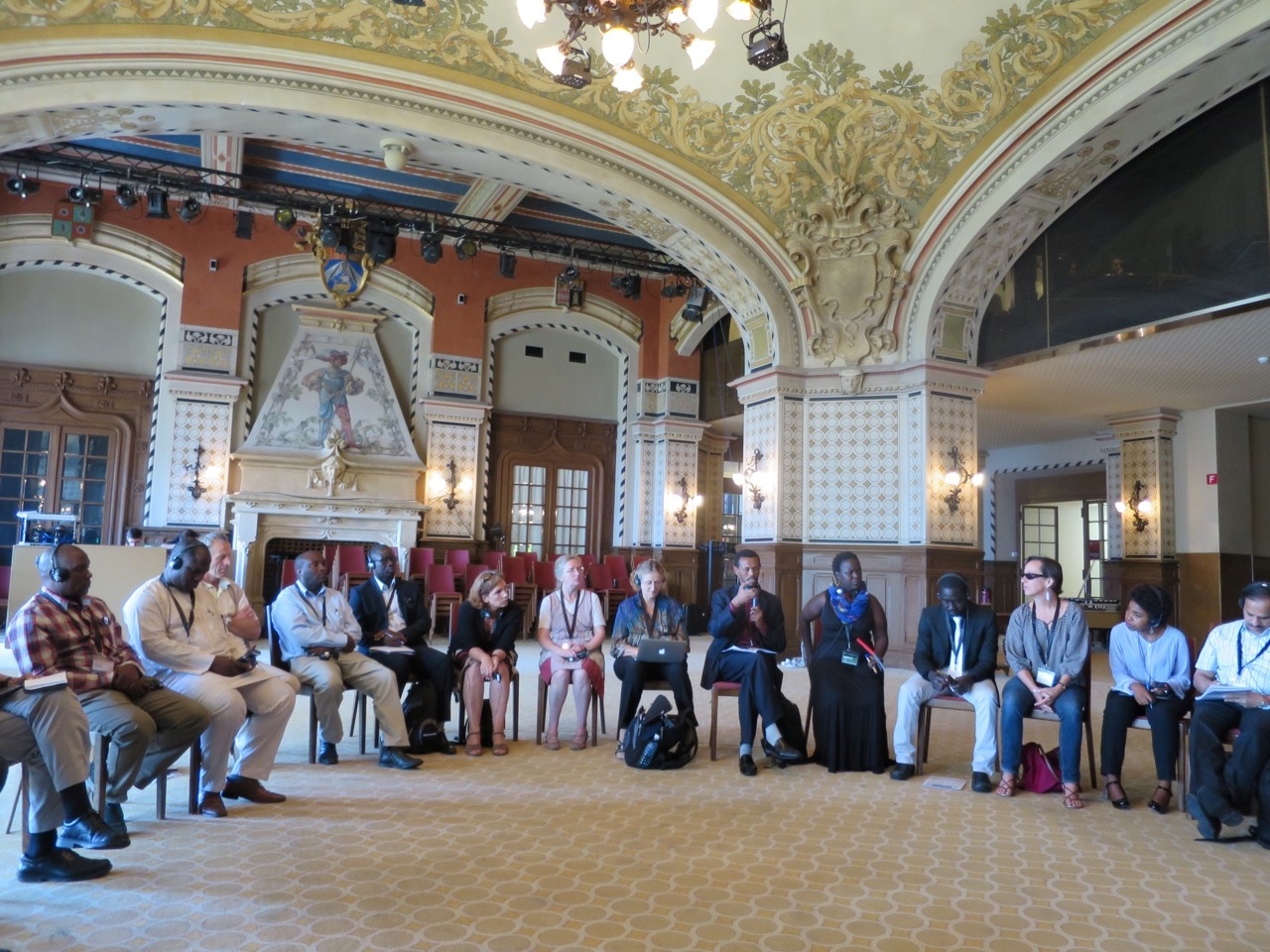 Noel Oettle, from Drynet Secretariat and Environmental Monitoring Group (South Africa) attended the 3rd Caux Dialogue on Land and Security in Caux, Switzerland between 10 and 14 July 2015 as a representative of the Drynet network. As in previous years, an international group of scientists, policy makers and practitioners gathered to explore the complexity, successes, opportunities and challenges of advancing human security in a resource-challenged world. 2015 Caux Dialogue showcased a wealth of perspectives and experiences from around the world, and drew attention to how a plethora of land-related issues are combining to make the societies of the planet less secure. Land degradation, resource exploitation, climate change, competition between expanding populations for shrinking resources, dispossession, dislocation and civil strife all combine in a depressing downward spiral.

On the other hand, in the course of the Dialogue practitioners and scientists also shared simple, effective, inexpensive and proven ways of restoring land to its full capacity to grow food, retain water and act as a natural buffer against extreme weather, thus creating greater security for land-using communities. Emerging practice in multi-stakeholder approaches was also shared, emphasising how important it is to ensure the government creates enabling legal and policy environment for action. This approach directly supports the most poor and vulnerable, helping them find income and more gainful employment on their own land.

Globally, despite the pressing imperative to do so, little land restoration is taking place. The reasons lie in divided responsibilities, and in the fact that most of the solutions exist outside the normal focus of governments and development agencies. In many cases reconciliation between hostile groups of resource users might be a pre-condition for any meaningful restoration of natural resources. These complex and sometimes contradictory factors were addressed by a range of stakeholders at the Caux conference.

A European view of the deepening global crisis

In the opening keynote address Rear Admiral Neil Morisetti (United Kingdom Climate and Energy Security Envoy, 2009 -13) reflected how the security community is increasingly recognizing that climate insecurity is providing a huge challenge to national security. Land, water and energy are essential to human security, yet increasing climate instability is contributing to instability in the global drylands belts. This puts pressure on systems and governance in these regions, and leads to migration and thus pressure on other countries in other regions. Effectively addressing the nature and pace of climate change is essential. In a globalised world, governance is the major challenge, and represents a risk management challenge that public and private sectors need to address. The problem is complex, and coherent action will be difficult to achieve. Unanticipated outcomes of actions are likely to be frequent. Nationally and internationally the focus must be on establish the right conditions for all to be able to contribute to taking action. Upfront investments are needed, and thus so are returns on investments. Unless we address climate change issues, health costs will also escalate. Governments must thus engage all key ministries to engage in the issues: defence, foreign policy, ODA, agriculture, health.

These sorts of issues were brought into sharp focus by speakers who could share something of the realities on the ground in countries in the global drylands. For example:

In 2014 there were 415,000 displaced people in Darfur (an area the size of France). In January 2015, a further 100,000 people were displaced. All of these people live in refugee camps. Resource competition and resource depletion have played a key role in this humanitarian disaster. Its long-term solution is not clear, particularly as displaced people can seldom go back to the places and livelihoods that previously supported them.

Another example that was shared was land grabs in the African drylands, where governments have handed over control of high-potential resources to investors who see opportunities to earn big returns on their investments, and in the process displaced the people who have traditionally lived there. This brings profit to investors, revenues and power to governments, and misery to the least enfranchised people.

The agricultural development model followed by Brazil was also critically examined: it has resulted in the destruction of millions of hectares of rainforest, and contributed to cataclysmic climate change whilst not improving the lot of the poor of the country. The environmental services provided by the landscapes have been depleted, and no-one has paid for their over-exploitation.

In Ethiopia a strong state has ensured stability in a culturally and religiously diverse country. This has enabled large-scale restoration of degraded farmland, with huge benefits to local populations. It has also created an environment in which investors take possession of land-based resources, reap short-term profit, and in some cases abandon them when the tax breaks and other incentives dry up.

Along with examples of “vicious circles” in which a range of causes have resulted in worsening conditions for land-using populations, experiences were also shared in Caux of “virtuous circles” which have linked peace-building initiatives with restoration of land-based resources.

Guillaume Benoit, Advisor for Food, Agriculture and Rural Areas in the French Ministry of Agriculture addressed the closing session. Farmers use 90% of the water consumed on the planet to produce crops, which are in turn traded and consumed as “virtual water”. The engagement of farmers in the food value chain is essential to enable them to derive improved benefits and to become more empowered as land managers.

Mr. Beniot pointed out that 30% of water used in the North African countries adjoining the Mediterranean is non-renewable, pointing to a situation that is very unstable in the medium to long terms. On the other hand, France has succeeded by supporting the family farmer, and ensuring that the farmer is the primary water manager. The French Minister of Agriculture, Stéphane Le Foll, along with many others from civil society and the scientific field actively support agro-ecology. Many farmers in France have shown that it can work and make profit, and in addition improve the quality of people’s live. But they need support. In December 2012 the government of France announced the plan for agro-ecology for France. The aim is that by 2025, 50% of farms in France will be agro-ecological.

Science has shown that there are many benefits that accrue fromagro-ecology, including improving water use and storage in the soil, enhanced food security, reduced greenhouse gas emissions, enhanced carbon sequestration and reduced urban sprawl. To be successful, this is an initiative that needs the engagement of many stakeholders. The government of France is committed to fighting poverty and food insecurity and to implementing the three Rio Conventions via agro-ecology.

Chris Reij of the Free University of Amsterdam spoke about the recent work on “scaling up” regreening, and referred to the six step approach that has been successful West African Sahel in restoring productivity to millions of hectares of land.

1. Identify and analyse existing successes in regreening
Many successful initiatives exist, at all scales and in all contexts. We need to uncover these and understand why they are successful, whilst also analysing the constraints and causes of failure
2. Create a grass-roots movement for regreening so as to expand successes
Farmers are the best communicators to other farmers, and efforts should help them to mobilise and share their successes.
3. Create enabling policies and legislation
Unless local efforts are supported by government via the law they will be undermined. In the Sahel, ownership of trees by farmers is essential if farmers are to realise the value of restoration.
4. Develop a communication strategy
Every citizen should be informed about the importance of land restoration, and the radio, television and other media can achieve this. The farmers themselves should be the ones sharing this, on the radio and via documentary films.
5. Develop agroforestry value chains
Farmers frequently struggle to earn a just return on their investments because of market failures. If the market is improved for sustainably harvested products of agro-forestry systems it will incentivise farmers to invest more on-farm.
6. Develop research to fill in gaps in existing knowledge
As the process goes forward it will be essential to fill in knowledge gaps.

In conclusion
Successful technologies and sound approaches to the problems of land degradation abound, and contribute very significantly to efforts of land-using communities to adapt to climate change and ensure the sustainability of their livelihoods and communities. However, land is increasingly being removed from control by small farmers, and being turned over to large investors who have a short-term interest in extracting maximum profit, frequently with disastrous impacts on ecosystems and local communities. Focused political effort will be needed to ensure that investments in land, especially those undertaken under the UN system, result in the well-being of local land-using communities.

Land use forms the point of convergence for such priority items on the global agenda as water and food security, extreme poverty, climate change (both mitigation and adaptation), conflict and mass migration. Six to ten inches of topsoil is all that separates stability and conflict. Yet every year an area three times the size of Switzerland is lost to agriculture. The world’s drylands used to feed about 40% of global population, but as land is lost and populations grow, conflict increases with more and more people competing for what remains. Eighty per cent of the world’s conflicts now take place in its drylands. Many dryland countries are at great risk becoming failing states if they cannot find ways to resolve these in sustainable ways.
Louise Baker of the UNCCD Secretariat reported that the UNCCD has targeted the 2 billion hectares of land that is degraded around the globe, and accepts that 75% of this (or 1.5 billion hectares) can be recovered with the right investments and approaches. Through the establishment of a new global fund and attracting private investors, the UNCCD intends to support investment in restoring degraded land as a contribution to a global response to climate change The goal adopted by the UNCCD is the restoration of 12,5 million hectares per annum. Can this be achieved in ways that will enhance human security and well-being?
In a world threatened by the fall-out of collapsing eco-systems, we constantly seek innovative “fixes”. Innovation draws on the best in the human spirit, but also risks introducing solutions whose unknown down-sides might well prove even worse than the problem that they seek to address.

The 2015 Caux Dialogue on Land and Security asked many of the crucial the questions; however, we will have to find the answers before investments determine the direction of the global restoration agenda.